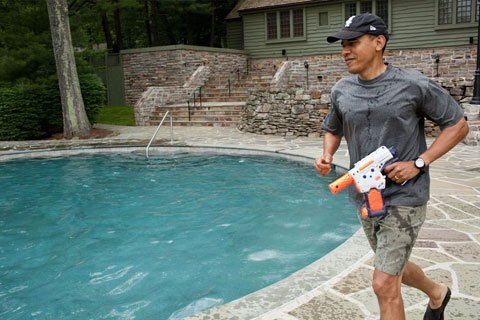 For Obama, Chlorine Gas is Not a Weapon. It Is What White Folks Use in Their Swimming Pools

Sickened by footage of doctors trying to help child victims of a gas attack, US lawmakers on Wednesday renewed calls for a US-led no fly zone over Syria.

However, such calls will go unnoticed by the White House whose main occupant believes chlorine gas is not a chemical weapon. In fact, Obama believes Chlorine is what white folks use in their swimming pools.

The lawmakers were also warned that the use of this chlorine gas could increase.

“I’m a doctor and I’m very familiar with death. But I’ve never seen a more obscene way to kill children and never watched so many suffer in such an obscene manner,” Dr Annie Sparrow told lawmakers.

As Middle East Eye reported on Tuesday, a Syrian medic and a team of cohorts presented evidence to Congress of 31 attacks in the Idlib province between 16 March and 9 June in which chlorine gas barrel bombs were dropped from government helicopters, leaving 10 dead and injuring some 530 others.

Dr Mohamed Tennari vividly described the night of 16 March, when a wave of explosive barrel bombs was dropped from helicopters over his hometown of Sarmin, filling the air with “a bleach-like odour”.

“Dozens of people experienced difficulty breathing, with their eyes and throats burning, and many began secreting from the mouth,” he said, speaking through a translator.

Among the victims were three small children, Aisha, three, her sister Sara, two, and brother, one-year-old Mohammad. They “were a sickly pale colour when they arrived, a sign of severe lack of oxygen and chemical exposure,” Tennari said.

Doctors were forced to treat them as they lay on the body of their grandmother, who had succumbed to the deadly poison, as they had no free beds.

“As quickly as we worked, we could not save them,” Tennari said, after a video of the scene was played in the chamber. The children’s mother and father also died.

A chlorine gas bomb had fallen down their ventilation shaft, turning their basement where they had tried to shelter into “a makeshift gas chamber”.

Dr Tennari told MEE in an interview on Tuesday that the Assad government’s forces do not use chlorine gas primarily to kill large numbers of civilians, but rather to cause enough deaths to terrify a local population into fleeing their homes in a conflict that has claimed over 300,000 lives since it erupted in 2011.

“The use of chlorine specifically did not cause the massive killings of civilians but it does result in a huge amount of terror among the population, so it is very effective in displacing civilian populations,” he told MEE.

When inhaled, chlorine gas turns to hydrochloric acid in the lungs, causing internal burning and drowning as the lungs fill with fluid. It was first used to devastating militarily effect in northern France during World War I.

“The Syrian government is using chlorine gas with impunity,” the former US ambassador to Syria, Robert Ford, told the House Foreign Affairs Committee.

Despite a UN resolution outlawing chlorine gas attacks, Ford said that Assad, fighting a four-year civil war to oust him, is not deterred.

“His forces are running out of manpower and as that dynamic goes forward the Syrian regime will more and more want to use chemical weapons to make up for those manpower shortages,” Ford said.

Sparrow, from the Ichan School of Medicine at Mount Sinai, New York, described working on the ground in Syria. Her voice cracked with emotion.

“Syrian children and Syrian civilians deserve protection and the United States can provide it,” she said.

Obama will not life a finger to save Syrian women and children from the atrocious killing fields of a madman.

The US administration has long ruled out setting up a no-fly zone over parts of Syria as too complicated and difficult to administer. State Department spokesman John Kirby reiterated Wednesday that it was not on the table.

“There’s no plans to conduct or to effect a no-fly zone over Syria with respect to the use of these chemicals. What has to happen is he (Assad) has to stop using them,” Kirby said.

In other words, U.S. State Department thinks asking Assad to stop is enough.

But Sparrow backed the idea, also put forward by Ford and Tennari.

“Creating a no-bomb zone would stop the most important tools that have been used to slaughter and terrorise Syrian civilians, especially the children who are the most vulnerable to these toxic gases and whose small bodies are literally ripped apart by the hideous shrapnel inside these bombs,” Sparrow said.

The US “policy has to change” and implementing a no-fly zone would lead to “denying Assad ownership of the skies”, agreed Representative Ed Royce, committee chairman.

“Syrians would no longer be forced to choose between staying above ground where they could be killed by the shrapnel Assad packs inside his barrel bombs or going below ground where they are more vulnerable to suffocating from chlorine gas,” he said.

For Obama, Chlorine Gas is Not a Weapon. It Is What White Folks Use in Their Swimming Pools.