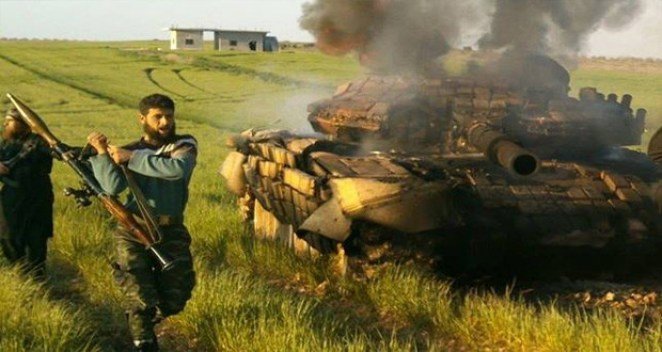 The battle in Hama is taking a turn for the worst for the Assad forces with the participation of Russian troops, Iranian Militias, and Hezbollah. The battle stretches over an area of 20 Kms long in North Hama.

According to Souriat, a pro-rebel website, the rebel forces, united under the banner “In defense of the Muslim nation”, destroyed in four hours, between 6 am and 10 am local time on Wednesday, 11 tanks, 5 BMP vehicles (Russian amphibious tracked infantry fighting vehicle), and 2 personnel carriers.

The battle caused the death of dozens of the Assad regime forces and the Iranian militias, with hundreds wounded, according to activists in Hama. Among those killed were three Russian officers to include the first Russian general.

The information has not been verified by other sources. Russia does not announce officially the death of its soldiers as it labels such information ‘state secrets’. If true, the first Russian general killed in Syria, on the first day of Russian troops engagement, is big news.

According to the rebels, they overheard on radio airwaves Russian officers order the withdrawal of the Iranian militias and the Assad forces back to the Morak town. The Russian air force provided the necessary air cover for the withdrawal.

No casualty figures were provided in the ranks of the rebel forces, also considered a ‘military secret’.

According to the same website, the rebels then advanced into areas evacuated by the Assad forces. The battle rages on.

Salah-Eddine al-Ayoubi Army (Part 2)
BREAKING NEWS: Results of the Referendum on the New Constitution
What a great man Barack Obama is
Putin Terror 436