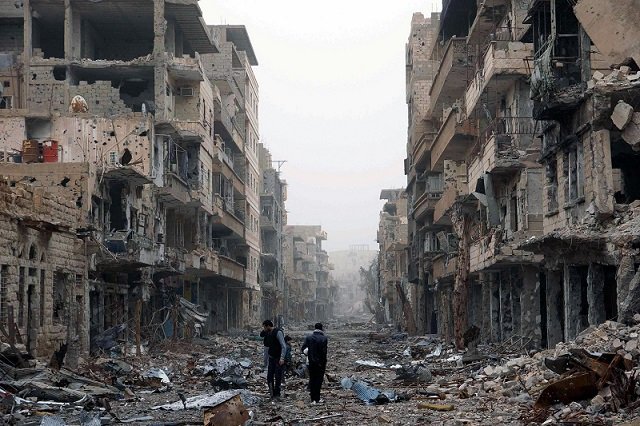 Did Arab Enmity Towards Israel Make Us Any Safer?

Look around the Middle East. What do you see? Arabs killing Arabs, Muslims killing Muslims, and extremists killing each other. Then, there is Israel. A sea of calm, prosperity, and forward-looking country.

Under the circumstances, we ought to ask ourselves what were the benefits we Arabs derived from our enmity towards Israel. Where do you see our societal and economic gains that we could proudly point to in any conversation or debate?

Almost 70 years of Arab enmity towards Israel, and we are the ones experiencing self-destruction and death. You would think it is about time to dig deep in our souls to search for answers. To understand what have our policies produced but carnage and ruin.

Did Arab enmity towards Israel make us any safer? It made things far worse. Not just for the national interests of every Arab country, but also for the Arabs themselves.

Assad resists Israel. Do you think he sleeps well? So did all of Iran’s proxy violent agents some, like Imad Mughnieyeh, are no longer alive to prove our point.

Morsi of Egypt resisted Israel, and so did the Muslim Brotherhood, al-Qaeda, ISIS, and al-Nusra. Do you see them experiencing peace and prosperity? Do you see these countries or organizations that have made it their life goals to harm or annihilate Israel do well? Do you think there is a correlation between stupid behavior and outcome?

Even Iran, which had a stroke of luck the American public voted for a man like Barack Obama, is counting its blessings prematurely. Every Arab country has Iran in its rifle scope. Time is not on Iran’s side, nor will time favor Iranian commitment to violence. Its enmity towards Israel competes with so many others, and all are suffering. Its turn is coming.

Arab enmity towards Israel destroyed Arabs, even when the occupier of the White House defended Israel against his own instincts.

Assad won’t change until he finds his end in a guillotine, a bullet, or a car bomb. Nor will Nasrallah who addresses his followers hiding underground like a rat. Nor will any of Iran’s proxies some of them still licking their wounds and whose sufferings have not yet dawned on their stupidity.

Did Arab enmity towards Israel make us any safer? Look at the past and the present to be a clairvoyant of the future. Going Palestinian has destroyed us so far.

Could this be the real reason why the U.N. unfairly targets Israel all the time? After all, the more conflicts the more relevant the U.N. becomes.

Did Arab Enmity Towards Israel Make Us Any Safer?

It’s a Shiite Against Sunni, Farsi Against Arab War, Stupid
Too Much Arab Talk When Action to Save Aleppo is Needed
Israeli Nukes: What Arab Rulers Are Thinking?
Things That Matter 382