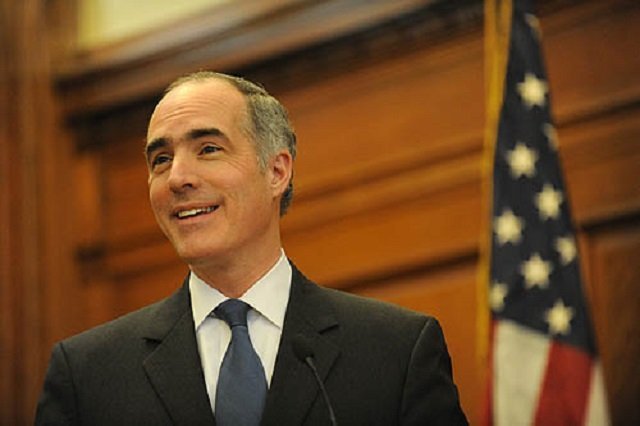 Democratic Senator Urges White House to do More on Syria

September 22, 2015 6:00 pm 0
A disease called blame someone else
Did you know Hezbollah was pregnant?
The United Nations’ sick honoring of Syria’s butchers

TFS Note: It matters little to Obama how many people from his own Democratic Party recommend he changes course on Syria, he will only do what he damn pleases. Obama trusted a 37-year idiotic novelist to set policy on Syria with no past experience whatsoever. It was about loyalty, not competence. Happy you voted for the con man in the White House who cannot lead a music band let alone this nation?

President Obama’s own party is directing more criticism at him over his handling of the crisis in Syria and neighboring countries.

Democratic Sen. Bob Casey of Pennsylvania penned a letter to Secretary of State John Kerry urging the administration to step up efforts to oust Syrian Bashar al-Assad, increase humanitarian assistance in neighboring countries and boost the protection of Syrian citizens still inside the country.

Casey joins a growing chorus of Democratic lawmakers who say the administration is not treating the humanitarian crisis in the Middle East with the urgency the situation requires.

“I believe the United States should make the protection of Syrian civilians from war crimes and crimes against humanity a higher priority,” Casey wrote.

Casey, a former chairman of the Senate’s subcommittee on the Middle East, expressed concern that Russia is entrenching itself in Syria, saying that country is increasing its support to the Assad regime under the guise of fighting ISIS.

So far, the administration has said it is also worried about Russia’s escalation there, but its message to Russia has been ambivalent.

“There’s an opportunity for the Russians, if they would like, to constructively contribute to the anti-ISIL coalition… we’d welcome their participation in that regard. But thus far, it’s unclear exactly what Russia’s intentions are,” White House spokesman Josh Earnest said in a briefing Monday.

Casey also said the U.S. should encourage neighboring countries that have taken in millions of refugees, like Turkey, Jordan and Lebanon, to allow legally registered refugees to take jobs that would not adversely affect local economies.

A recent report by the International Labor Organization noted that Syrian refugees in those countries struggle to make the same wages and earn the same benefits as citizens there.

Casey also said the United States, in its position as a permanent member of the United Nations Security Council, should do more to hold Syria accountable for its violation of measures that forbade the use of weapons like barrel bombs in populated areas.

The humanitarian crisis in Syria and Iraq has become a rallying cry for many Democrats, who say the White House could be doing more to help.

Six senators recently called for the administration to increase assistance to displaced Iraqis, and many have also said the U.S. should accept more of the region’s refugees within its own borders.

Democratic Senator Urges White House to do More on Syria

Defending for All or Killing for One?
Iran is leading Obama by his nose
Like Horses on the Auction Bloc
Slippery Barack Obama 947