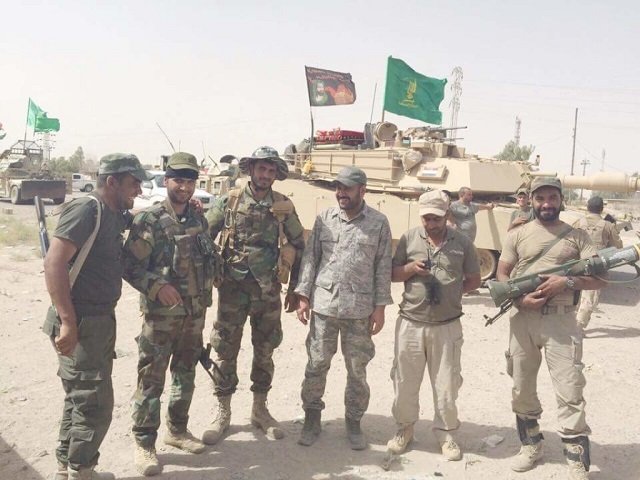 July 14, 2015 6:01 am 0
Don’t believe you can survive what makes you survive
House Calls for War Crimes Tribunal to Prosecute Assad, Allies
After the Iran Deal, Obama Continues to Harm U.S. Allies

TFS Note: Badr was involved in carrying out attacks against US troops in Iraq between 2003 and 2007. Badr owning or operating an M-1 Abrams tank is like al-Qaeda was granted the same right after 9/11. This picture is equivalent to Ali Khamenei saying to Barack Obama “I own you”.

The Badr Organization, an Iranian-backed Shiite militia, has released new photographs showing it to be in possession of at least one US M1 Abrams tank. In both photos, the Badr flag can be seen flying on top of the tank.

The photos, which were shared with The Long War Journal by Twitter user @Green_Lemonnn, show at least one Abrams tank being touted reportedly in the Saqlawiyah area of Iraq’s Anbar province. Six Badr fighters and commanders posed with the tank in one photo. One fighter can be seen holding a US-supplied AT4 anti-tank rocket. The US began sending the rockets to Iraq in previous months to help the Iraqi military defeat armored Islamic State suicide assaults.

The Badr Organization, formerly known as the Badr Brigade and Badr Corps, is led by Hadi al Ameri, Iraq’s Minister of Transportation. Ameri is closely tied to Iran and its Islamic Revolutionary Guards Corps, and to Qods Force commander Qassem Soleimani. During the Iran-Iraq war in the 1980s, Badr fought on the side of the Iranians. Ameri is routinely photographed with Soleimani, and has been quoted as saying, “I love Qassem Suleimani! He is my dearest friend.”

The Badr Organization is part of the Popular Mobilization Committee, which is directed by Abu Mahdi al Muhandis, a US-listed Specially Designated Global Terrorist who is an adviser to Soleimani. Badr is one of several militias engaged in the fighting against the Islamic State.

Sponsored Corruption and Neglected Reform in Syria
Bashar Assad may be weaker than he thinks
Stratfor: Get Your Act Together
Slippery Barack Obama 976