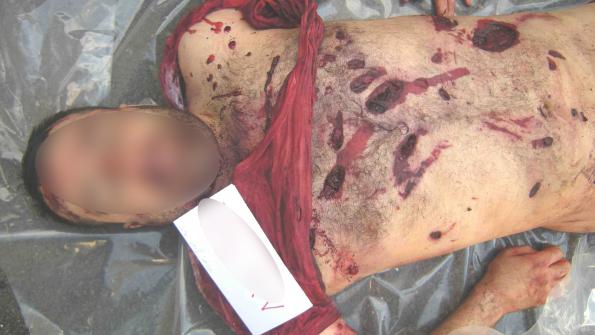 Will Assad survive the Iranian regime?

February 28, 2015 12:01 pm 0
Stalin: Death is the Solution to all Problems
Why moderate Muslims should NOT speak out
Just Civil War in Syria? Think Again

Have you ever met a man who believes he can cheat most of the people all the time? Baschar al-Assad is one of those men.

To get a truthful mosaic of his cheating, one must connect many dots. However, as luck would have it, there are two articles if one reads, one would be able to fully grasp why Assad is a dead man walking.

The first article was drafted by the Foreign Secretary of the UK Philip Hammond and the Foreign Minister of France Laurent Fabius. In it, they begin by telling Assad that the UK and France are not fooled.

From the palace where he is hunkered down, Bashar al-Assad is not just waging a war against his own people; he is also fighting to improve his public image.

In the Western media, he is using the terror created by the extremists to present himself as a partner for us against chaos. Some appear to be swayed by this argument, saying that in the face of extremism, Assad’s injustice and dictatorship is preferable to disorder.

In reality, Assad is himself stoking injustice, disorder and extremism, and France and UK are standing firm together against all three.

There could not be any better diplomatic language to express to Assad, in no uncertain terms, that his family bus has reached the end of the line.

Both FM Fabius and FS Hammond are privy to unique intelligence the rest of us cannot possibly know. Such is expressed amply in this paragraph they wrote:

The reality is that Assad is considerably weaker than a year ago, and growing weaker still. His army is depleted, with increasing desertions by its own soldiers, and forced to recruit mercenaries from as far away as Asia. He is beholden to his regional sponsors who, like Hezbollah, are the power behind the throne in Syria.

In other words, Assad is weak and matters little. Here is another reality also based on intelligence:

Proposing Assad as a solution to the extremists is to misunderstand the causes of the extremism. After 220,000 deaths and millions of displaced persons, we would be foolish to assume that a majority of Syrians would willingly agree to live under the control of their tormentor. And for us to dash their hopes of a better future for Syria without Assad would only serve to make many Syrians even more radicalised, pushing moderate people towards extremism rather than the reverse, and consolidating a jihadi stronghold in Syria.

No one could have said it any better. Anyone with a basic knowledge of the Middle East understands how important these words are.

The second article, published by TIME MAGAZINE it titled “Why Bashar Assad Won’t Fight ISIS”, is as powerful because it discloses the extent of cooperation between Baschar al-Assad and the terrorists in ISIS.

For those who believed Assad wants ISIS dismantled, think again. The brand has become too valuable for a regime that nurtures and grows terror like a Hitnakhlut grows healthy children.

The author Aryn Baker cites a Syrian businessman, who is close to the regime, with the following quote:

The more powerful ISIS grows, the more they are useful for the regime. They make America nervous, and the Americans in turn see the regime as a kind of bulwark against ISIS.

So by ignoring the conflict between the Syrian opposition and the Assad regime to focus purely on ISIS may solve problems in the short term, says the diplomat, “but there will be more problems to come. These are the ingredients for a further escalation of the conflict — alienating large parts of the Sunni population, so that they have no choice but to join ISIS. Not for ideological reasons, but because they will do whatever it takes to overthrow the regime in Damascus.

Translation? The longer Assad remains in power the more inclined the moderates will be to join the extremists and the stronger ISIS gets. The geniuses at the White House are still trying to figure this one out.

It is important to get to really know your neighbor. Not the one he is trying to sell himself as but the real one whose survival depends on violence and terror against his own people and his neighbors.

Poor Assad, he still does not realize his family bus has reached the end of the line.

The only question we need to ask ourselves is not whether Assad survives but will Assad survive the Iranian regime or not.

Will Assad survive the Iranian regime?