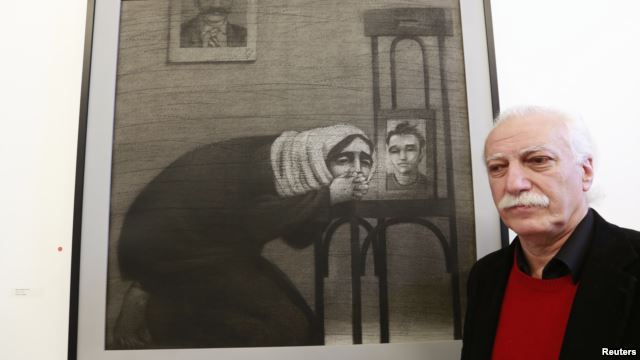 To The Minorities of Syria: Meet Your Protector

July 20, 2013 8:44 pm 0
An imaginary memo on Syria
Did We Reach the Limit of Syrian Tragedy?
How Four Years of Civil War Has Destroyed Syria

The Assad regime has arrested Youssef Abdelke, a prominent artist whose work has adorned the walls of the British Museum and L’institut du Monde Arabe located in Paris. To the minorities of Syria, we say: Meet your protector, the psychopath Baschar al-Assad.

His wife, Hala Alabdalla, herself a filmmaker, began a Facebook Page to free her husband who was born in 1951. Abdelke was arrested with two others at a checkpoint in Tartus on Thursday.

Before he was arrested, he told Reuters at a gallery in Beirut where dozens of his works were on display:

“I think all the works in one way or another try to express the concerns and emotions of the ordinary Syrian citizen amid this huge river of blood.”

Abdelke is a Syrian Christian.

His art has been quite expressive of the Syrian civil war and its tragedy on the Syrian people; He also is a member of the Syrian opposition against the Assad regime.

The Syrian minorities deserve better than to be deceived by a con man and a psychopath named Baschar al-Assad who claims to be their protector when in fact he is as much their butcher and their tormentor.

To The Minorities of Syria: Meet Your Protector

Something is Happening in Damascus
Fanatics never forget, or forgive, they just fight
Excusing the Ignorance of a Jewish (Not Israeli) Blogger
Radicalism 567