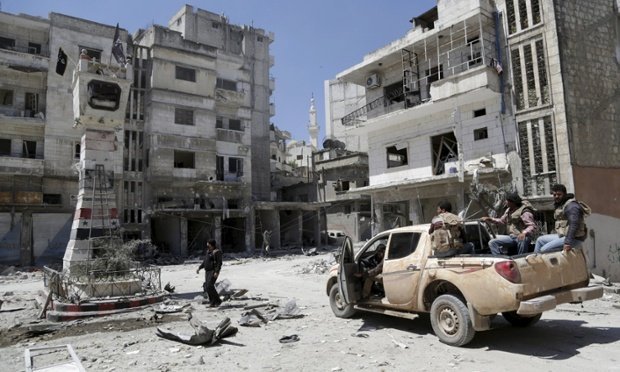 Assad forces are attempting to advance towards the rebel-held town of Jisr al-Shughur, where around 250 regime force members and their families are trapped in a hospital building.

Activists on the ground said government troops were now within two kilometers (just over a mile) of where the group has been trapped since rebels seized Jisr al-Shughur in northwestern Idlib province two weeks ago. Now, Assad troops battle to free them.

There was fierce fighting between rebels and army backed by air strikes as they sought to approach the hospital on Jisr al-Shughur’s southeastern outskirts.

According to one activist, “Regime forces and allied fighters are now two kilometers from the hospital and desperately want to save the 250 people besieged inside,”

Regime forces inside the hospital have been battling rebels to keep them from entering the building.

It remains unclear how much food and ammunition is available to those trapped, and how many of the 250 people inside are civilians.

The loss of the town, strategically located near the border with rebel-backer Turkey and alongside the regime stronghold of Latakia province, was a new setback for the government.

Since then, the regime has also lost one of its remaining military bases in the province.

Once Syria’s economic powerhouse, Aleppo has been ravaged by the country’s war and is divided between government control in the west and rebel control in the east.

Regime Assad troops battle regularly by carrying out air strikes and drop barrel bombs on the rebel side, and opposition fighters often fire rockets into the government side.

More than 300,000 people have been killed in Syria since the conflict began in March 2011 with anti-government protests that spiraled into a war after a regime violent crackdown.