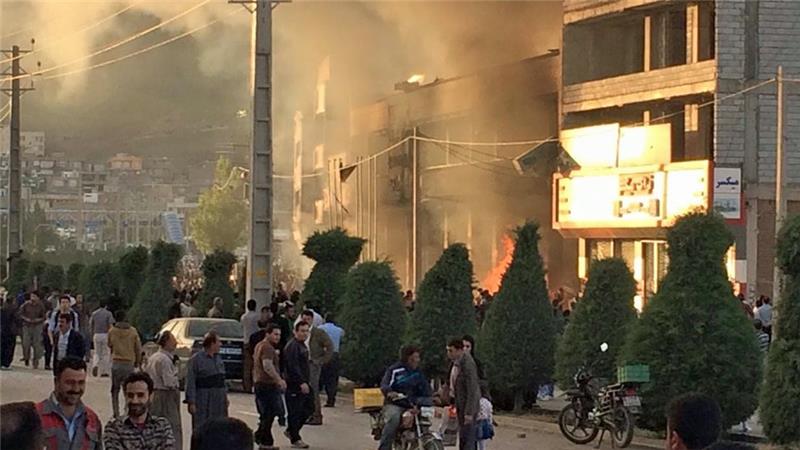 May 9, 2015 8:38 pm 0
France to support a Syrian buffer zone
Syrian Tragedy as a Fundraising Opportunity
RIP John McCain We Won’t Forget You

Just-in-time new fronts against the Iranian regime are unraveling by the Kurds that began in Mahabad, Iran and new tightened security measures in the Dahyieh of Beirut, Hezbollah’s headquarters and source of strength in Lebanon. Both represent added resources and manpower that Iran and Hezbollah may not be able to afford.

Trouble started in Mahabad May 4 after the death of a young Kurdish girl who had committed suicide to escape rape at the hands of a government official. Farinaz Khosrowani, an employee of Hotel Tara in Mahabad, jumped out of the hotel’s window. She was escaping her rapist, an agent of the intelligence ministry.

Farinaz was a 26 year-old computer engineering graduate. Her funeral was held on Tuesday in Mahabad.

This is a reminder of how the Arab Spring began when a Tunisian immolated himself after harassment by local police.

After a call for peaceful protests in the Kurdish cities throughout Iran, Iranian authorities have deployed military assets to prevent further demonstrations. A local activist observed:

“A large number of both Iranian army units and Revolutionary Guards have been deployed in the Kurdish cities. In particular, in the cities of Bukan, Sanandaj and Shino the situation is very tense and shootings can be heard from some areas. Iranian Republican Guards and Special Forces, joined by additional armed units, transferred from Sa’en and Qalawa and are on high alert in the Kurdish city of Bukan, west of Azarbaijan Province .”

Furthermore, many unofficial armed groups (i.e. Basijis) backed by the Iranian army have been mobilized in Bukan to crack down on any protest that may emerge in city.

The situation is also extremely delicate in Sanandaj where Iranian army units can be observed on every corner of the city. Local activists have asked the people to pour onto the streets and start peaceful demonstrations.

A local Kurdish news agency said that, “A number of unknown armed men have opened fire on an army unit stationed on a street in the middle of Marivan.”. Iranian media reported armed clashes outside the city of Shino.

Markets and shops have all been closed in Marivan on Saturday, and Internet and telephone lines have also been severed by the Iranian regime.

The tightened security situation comes after peaceful protest on Thursday, May 8 in the Iranian Kurdish city of Mahabad turned violent following the arrival of anti-riot forces.

Special riot forces and special guards were called to disperse the demonstration. They fired live ammunition and tear gas at the protesters, resulting in unverified reports of the death of two protesters and injuries to dozens more. Pictures and videos that have gone viral on social media show a large crowd in front of the hotel with smoke rising from the building.

The report comes as fighting intensified in the past week in the mountainous Qalamoun region across the border from Lebanon, where Hezbollah fighters, along side Syrian forces, are engaged in battles against Syrian rebels affiliated with IS and al-Qaida’s Nusra Front.

Hezbollah and Syrian government troops took control of areas near the border town of Assal al-Ward Thursday. Despite little ideological differences, Hezbollah and ISIS are opposed and in conflict with each other across Syria, particularly in the north.

Those two just-in-time new fronts against the Iranian regime may force the the Mullahs to re-calibrate their support for Assad in Syria and its deployment strategies elsewhere.

Iran is now facing trouble in every Arab region it had attempted to control using terror as its preferred tool.