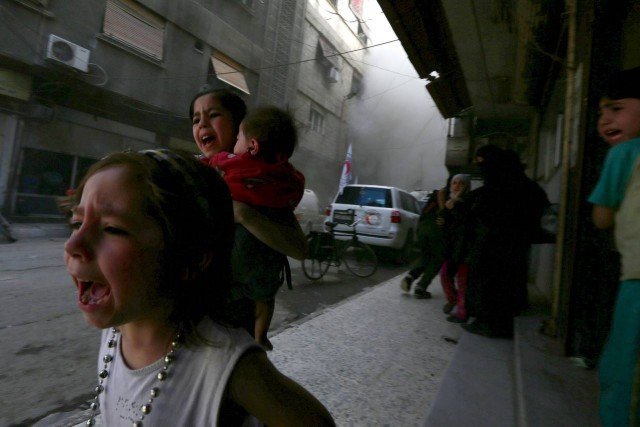 May 9, 2015 10:00 am 0
Chlorine Gas: UN Moved to Tears, Jihadists Moved to Volunteers
Chlorine attacks continue in Syria with no prospect of Assad being brought to account
How Syria’s Dictator Slaughters His People

The Wall Street Journal reported the Obama Administration is responding to the latest spat of Assad gas attacks by asking three different Ambassadors to address them. Verbally and seriously.

Gee wiz, finally. Assad will have no choice but to back off just because Obama’s Ambassadors pressured him.

Count them. Three different Ambassadors. Wow. What a privilege! Syrians are tickled death with joy.

It’s golf time folks. Our president has much more important things to do now.

First, it is Ambassador Samantha Power whose heart is in the right place but since she did not come through the dirty Chicago political machine, Valerie Jarrett has her by the hair. “Let her talk all she wants” must be what Jarrett tells herself every time she cringes at the notion Chicago did not train this (fill in the blank yourself).

Wonder what happened to Ambassador Susan Rice! The one that thinks Bergdahl served with “distinction and honor” when he deserted his fellow soldiers and caused the death of few Marines pursuing his ass around Afghanistan. Actually, glad she does not talk Syria. Things would get much worse really rapidly.

Then there is Ambassador Anthony Blinken, Deputy Secretary of State, who confirmed what the world already knew. What happened to John Kerry? Fishing in Monte Carlo? Was he not the one that told us he got rid of all Assad chemical weapons? Too ashamed to show your face John, are we? The worst Secretary of State ever barred none. Since 1776.

The last U.S. Ambassador was our representative at The Hague-based Organization for the Prohibition of Chemical Weapons, Robert Mikulak. With all due respect Mr. Ambassador, Assad fears no Hague as long as Barack Obama is in the White House. A feckless, weak president invites terrorists to kill and destroy. It is that simple.

Obama won’t touch Assad gas attacks. He is just above it all now. Why should he say a word about Syria as long as Khamenei has his number? It will only make matters worse for his legacy. People dying from the terrible gas humanity banned so long ago is not his problem. Call in the Ambassadors and hopefully the pressure would ease on Barack Obama.

Will the Ambassadors stop Assad from perpetrating his crimes? No, they won’t, and Obama knows it. It is all about self-relief from political pressure this president hates with passion. It is never about saving lives with Barack Obama.

Obama won’t touch Assad gas attacks because he is not willing to lift a finger to help ease the pains of Syrians. His administration has accepted only 335 Syrian refugees from a pool of millions because he knows they won’t vote as Democrats considering Obama’s apathy towards punishing the Assad regime for the crimes it committed. The Latinos can come in this country illegally by the millions, but not Syrians, even if legally, as long as their votes are not secured. Chicago, remember?

Assad will continue using gas, and Obama will continue to ignore him or send some powerless diplomats to relieve himself from pressure. His golf handicap suffers every time Syria is in the news. Our great president only wishes Syria would just disappear from the world map so he can finally enjoy a golf outing without hearing one word about the crimes of Assad.

Our president just needs our sympathy and understanding. That’s all.