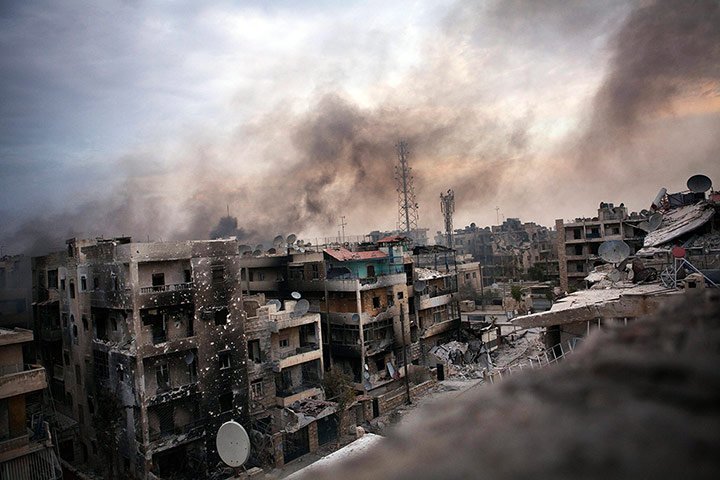 Assad must be dreaming he can glue Syria together

February 23, 2015 8:15 am 0
Syria Rebels Attack Government Intelligence Center in Aleppo
Christians in Aleppo call for an end to conflict
Barbarism Knows No Limits in Aleppo

For those who are not familiar with the commercial responsibilities each region plays to form Syria’s economic backbone, permit me to relay the importance of the city of Aleppo and the surrounding regions.

If you consider Damascus to be the shopping mall, Aleppo is ADM, Kraft Foods, General Mills, Proctor & Gamble, and SYSCO combined. Without Aleppo’s functioning economic hub, the wholesale industry, to include the food chain, breaks down almost completely. Aleppo’s contribution to Syria’s economy is as important as Micky Mouse’s contribution to Disney.

The industries in the north of Syria are controlled by old Sunni Merchant families who for the most part are in lockstep with the regime’s demands. Whether out of fear to protect their interests or out of ideological beliefs, the richest Syrian families who control Syria’s economy share with the Assad regime the need to halt the civil war in order to rebuild their factories and move their merchandise.

Because of the atrocities Assad has committed against the Sunni population, the population-at-large in Aleppo and surrounding areas consider these merchants to be agents of the regime. Syrians no longer consider their ownership in any commercial enterprise to be a viable legal entity. By population-at-large we mean the indigenous Aleppans who clocked their 6am to 6pm days working the floors of these factories or driving the trucks to deliver their wares.

The merchants realize this factor and find themselves wedged between their fear of the regime and a functioning factory.

Assad, meanwhile, is betting that if he defeats the rebels, Aleppans will have no choice but to return to work to earn a living. This formula is too simplistic. The Assad regime is assuming the war does not provide a mechanism for wages to be earned. If the Lebanese civil war lasted 17 years, the Syrian civil war is being fed to last as many if not more. Syrians fighting the regime not only earn a wage but they also earn the right to exact revenge upon Assad and his cronies as long as this war is unstoppable.

With oil prices probably reaching $10 a barrel, the pressure on Iran to re-calibrate its terror spending budget will force the Assad regime to struggle to end the war as much as to win it. In other words, the window of opportunity Assad supporters have to realize the obvious is closing faster than they think. Eventually, Assad may matter no more because the story will be written by those who outlast the tired and the wary. The longer the war goes on, the more vulnerable the Assad camp becomes.

If I were a Christian or an Alawite living in Syria, I would accept an alternative to Assad in return for safety and the end of the war. The price of standing by Assad is going to be much higher than anyone believes.

Assad must be dreaming he can glue Syria together