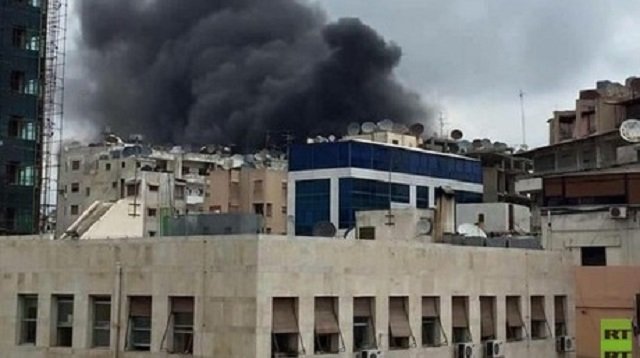 August 13, 2015 2:34 pm 0
Assad Has Yet to Pay for Assassinating Rafik Hariri
The Dead Horse of Foggy Bottom
Ahmadinajead Visiting Lebanon, His Occupied Territories

Neither Assad, nor Iran can protect Latakia or the Alawites anymore.

Two people were killed and 14 wounded Thursday in a rare rebel rocket attack on the provincial capital of Assad’s coastal heartland, a monitoring group said.

According to activists on the ground, rebel groups stationed around the city of Latakia fired rockets into the city center and along the waterfront.

“At least two people were killed and 14 people were wounded when rockets fell on March 8 street, near the (Islamic authority) Dar al-Ifta building in the middle of the city,”

They said rebel factions — mostly from Islamist groups — were taking up positions overlooking the city and firing rockets before leaving for areas under their control. This is changing fast and Assad is unable to protect Latakia.

State television channel al-Ikhbariya showed footage of a city street with several cars on fire, saying it was the scene of the rocket attack.

Thick black smoke billowed out of the charred vehicles as a fire truck sped down the street and people hurriedly walked away.

On May 25, four people were killed in a large blast in Latakia city, which some sources attributed to rebel rocket fire.

A power rebel alliance including al-Qaida’s Syria affiliate al-Nusra Front is edging towards Latakia province from Sahl al-Ghab, a strategic plain in the adjacent Hama province.

The Army of Conquest is only two kilometers (just over a mile) away from the regime’s regional military headquarters in the town of Jureen.

If the rebels manage to capture Jureen, they will be able to advance into the mountains of Latakia and bomb several communities from Assad’s Alawite sect, an offshoot of Shiite Islam.

The western coastal region of Syria has been largely spared the worst of the violence that has wracked the country since an uprising that began in March 2011.

Many Syrians displaced by violence in neighboring regions have taken refuge in Latakia province and some businesses have moved to the relative safety of the area.

The aerial raids on Arbin, part of the Eastern Ghouta region near the capital, occurred just after midnight, but some civilians were still stuck under the rubble on Thursday afternoon.

It was the second day of a fierce regime bombing campaign on Eastern Ghouta, which killed 37 civilians on Wednesday.

Six civilians, including two women and a child, were killed in raids on the village of Kfar Oweid, and another seven civilians, among them two children and a woman, died when regime aircraft bombed the Jabal al-Zawiya region.

Syria’s multi-front war has cost the lives of more than 300,000 people and has forced millions to flee their homes.