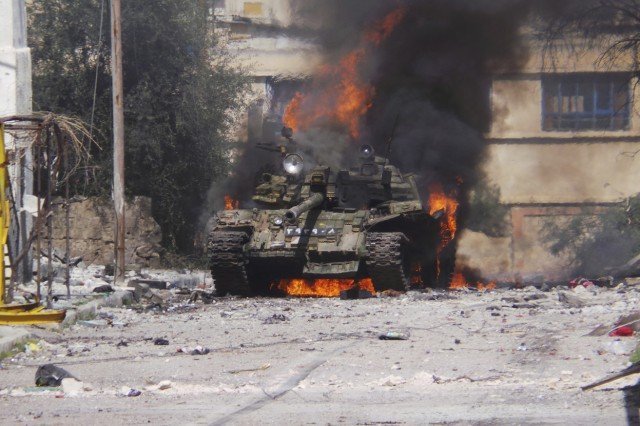 No other Arab regime has as many enemies to consider as the Assad regime has accumulated over the years. You can find Assad enemies in Lebanon, in Jordan, in Israel, in Turkey, in Iraq, in the Arab Gulf countries, as well as in the U.S. whose soldiers suffered IED death traps in Iraq with help from Assad.

Each suffered from the Assad terror, violence, and the extortion he practiced with abandon (The wealth the Assad family has accumulated over the ears in the billions of dollars has been extorted partially from the rich Gulf countries by threatening them with terror and violence). With the latest Assad defeats on the battlefield, Assad enemies smell blood, and they are uniting to strike him down for good.

Who would have thought that Israel and ISIS, two Assad enemies both of whom are at the end of each other’s spectrum, are striking Assad simultaneously? ISIS in the north and Israel in south western Syria. Both for different reasons even though the outcome is the same  aimed at weakening Assad and removing the threats he poses to Syria’s and Israeli civilians.

While Israel is striking to destroy the regime’s deadliest of arsenal, Lebanon is not standing still. Saad Hariri, the former Lebanese prime minister, is in the U.S. today seeking support for the removal of Assad. The Lebanese people will never sleep well until Assad and his family grace the dirt above their graves.

In light of the ‘Decisive Storm’ Saudi Arabia launched in Yemen, Assad enemies smell blood and are mobilizing on all fronts to see that his end is near. This is an opportunity that won’t happen again.

While military and lobbying steps are taking place to end Assad’s rule, so are the diplomatic steps, as expressed by many European countries as well as the U.S., that refuse Assad and his ilk as a negotiating partner. Iranian and Russian full support has extended the life of his regime, but it is apparent their support will not save the regime. Only willing western powers can save Assad and almost all remain unwilling. They too smell Assad blood and are hoping Putin will finally come to his senses.

Our bet is that Jisr al-Shugur battle Assad just lost will force Putin to come to the table. The Assyrian Orthodox Christian communities in Syria live some five miles from Jisr al-Shugur, and if the Muslim extremists begin pushing westward towards the coastal towns of Syria, Putin will have no choice but to abandon Assad to find a sensible solution that meets the security and economic needs of all Syrians and their neighbors.

It is high time this Assad criminal and the thugs around him are removed from power for good.