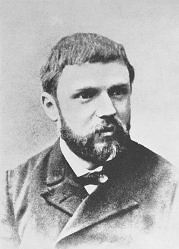 Growing under a French education and culture, as young students we learned much about Voltaire and Moliere, about Hugo and Maupassant, about Pascal and Descartes.

But later at Wooluwe St. Lambert in Brussels, with emphasis on polytechnic math, I learned of the Poincare Conjecture.

I heard about it whispered in corridors, talked about in Holy Grail terms, and discussed only in circles that fully understood its magnitude.

Little did I know that the simple concept of the Poincare Conjecture really applies to many problems solving in life, if you simplify the elements.

Poincare asked a simple question: Is the sphere the simplest shape in 3 dimensions?

Mathematically, this was proven to be correct by the mathematician Grigori Perelman (Russian Jew) in 2002. It was the most stubborn mathematical problem to be solved ever since Poincare brought it to the surface almost a century ago.

Here is a simplified way to explain it.

With a thread, wrap an apple at its center. If you pull on the thread, it will eventually reach the north or south end and dissolve into a single point.

But if you conduct a similar observation on any object that is non-spherical (a donut or a cube for example), the thread will get stuck in the center.

If the world accepts the notion that our region is an apple, like all other regions that faced tragedies (Europe during the World Wars), the single point represents freedom and democracy, and the thread is the mean by which we reach the single point, then we are on our way to solving the great mystery of the Middle East.

Our dilemma lies in some believing the region is a donut and others in empowering elements unable to reach a single point.Â

Simplify the elements and you will solve the problem. Adopt the same means achieved in Europe and in the Pacific to usher prosperous times for countries and regions no one during these times thought possible.

Policy makers in those days were adamant about Japan’s inability to become a democracy after witnessing the insane suicidal missions of Japanese soldiers in the service of their Emperor. Does that sound familiar?

The means used were neither diplomatic nor peaceful. That is not to say we should resurrect Patton or Eisenhower to launch a war upon the region, but it means we should not use a thread that gets stuck in the center.

The Muslim Brotherhood is the wrong thread because it will lead to changing the apple into a donut. Further, there are those who claim the region is not an apple in the first place because Islam is not compatible with democracy. Finally, those Arab ruling families who believe the region is a donut and are unwilling to use a thread or to provide the right conditions to reach a single point.

Simplify the elements and the mean by which we can reach a single point and we will have peace in the Middle East the way the Pacific and the Far East have peace today after a history of centuries full of blood.

Simplify them by imposing a thread willing to deal with the region as an apple and not a donut.

Syrian Opposition 2.0: Alleviate the Fears of the Minorities, Drop the Arab League
Saudia Stirring
What Hafez May Have Told Baschar on His Death Bed
Syrian Revolution 1335