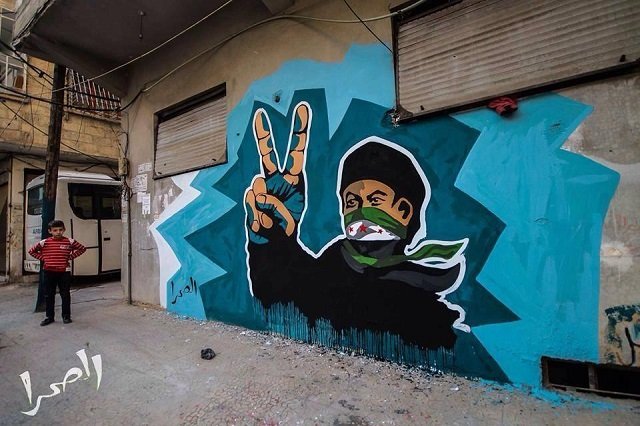 Source: Stars and Stripes – by Frederic C. Hof (An under-the-radar revolution in Syria)

With Iran circling the wagons around an ever-shrinking Syrian statelet nominally headed by Bashar Assad, a key question is coming into sharp focus: Who might ultimately replace the ruling clan if Tehran cannot keep its clients afloat? The answer is both complex and hopeful. Self-government at local levels is taking root in Syria and forms the basis for what should come next.

One of the few uplifting experiences to be had in any Syrian context these days is to meet with young Syrian activists, as I recently did in Gaziantep, Turkey. A young lawyer said something striking: “This is not just a revolution against Bashar al-Assad. It is a revolution for self-government. Replacing Bashar with someone else issuing decrees from Damascus — even someone much better than Bashar — is not acceptable.”

From the beginning of the Syrian uprising, unarmed activists have formed, under the worst security conditions imaginable, local councils to provide governmental services to their neighbors. This is revolutionary. For 40 years the Assad family had concentrated in its own hands, in Damascus, the direct governing of all Syrians. Officials assigned to Syria’s outback were, at best, order-taking clerks. At worst they were active members of a clan-dominated police state and terrorism network. Unless Iran helps its client re-subjugate Syria, the days of Damascus-dominated governance are done.

There are today hundreds of local councils throughout non-Assad parts of Syria. Some operate clandestinely in areas overrun by the so-called Islamic State group. Some operate in areas where the Assad regime — with Iran’s full support — unloads helicopter-borne “barrel bombs” onto schools, hospitals and mosques. Some operate in neighborhoods subjected to Iranian-facilitated starvation sieges. These local councils are supported by a vast network of civil society organizations — the kinds of voluntary professional associations that undergird Western democracies. All of this is new to Syria. It is the essence of the Syrian Revolution.

This combination of local councils and civil society organizations is a cocktail of bottom-up, localized efforts. The women and men risking all for their neighbors are heroes. Yet these heroes are literally unsung. Everyone in Syria knows of Assad and his rapacious family. Many in Syria know the names of exiled opposition figures and leaders of armed groups inside the country. Yet those who represent Syria’s future political elite are largely unknown. Getting these battle-tested leaders into Syria’s national political mainstream is essential.

The challenge is to build links between a Syrian opposition-in-exile recognized by the United States and others as the legitimate representative of the Syrian people and those on the ground who are earning legitimacy the old-fashioned way. Young activists tell sad stories about trying and failing to attract the interest of the opposition’s “Syrian Interim Government” in Gaziantep. They offer compelling accounts about providing vocational training for women while Assad’s bombs fall, about promoting independent judiciaries in the face of Assad’s despotism and the sectarian alternatives, and about helping local councils educate children so that young Syrians can be kept out of the clutches of armed extremists. They also tell of meetings with interim governmental “ministers” who spend all of 20 minutes feigning interest before breaking out their cellphones and moving on to other matters.

Having bestowed recognition on the external opposition in 2012, the United States and its partners should get it ready for prime time — prepare it to govern in case an opportunity, perhaps in the form of a protected haven, suddenly presents itself. Yet the connections of Syria’s would-be political masters to actual, on-the-ground governance in non-Assad, non-Islamic State territory are tenuous. Activists complain that visits to Syria by Turkey-based opposition officials are few, far-between and often invisible.

Western assistance to local councils and civil society organizations has often been excellent. Hands-on U.S. tough love for exiles — often left in the clutches of feuding Saudis, Qataris and Turks — has been abysmally short-changed. Were the Syrian Interim Government to install itself inside the country now, it would be pushing buttons connected to nothing. It would be clueless. It would be instantly irrelevant.

The alternative to Assad is arising from Syria’s grass roots. That alternative needs to be nurtured and protected by the United States and its partners. And it needs to be connected to external structures recognized by the West as legitimate. Failure to do so to date accounts in part for bizarre concerns vocalized by Obama administration officials that Assad — the mass murderer — may fall too quickly. He cannot fall quickly enough. Yet those in governments who agonize about the seeming absence of alternatives have done far too little to nurture one. They have failed to connect the dots between would-be leaders in exile and those inside Syria who are leading a self-government revolution.

Frederic C. Hof, a senior fellow at the Atlantic Council’s Rafik Hariri Center for the Middle East, served as a special adviser for transition in Syria at the State Department in 2012.