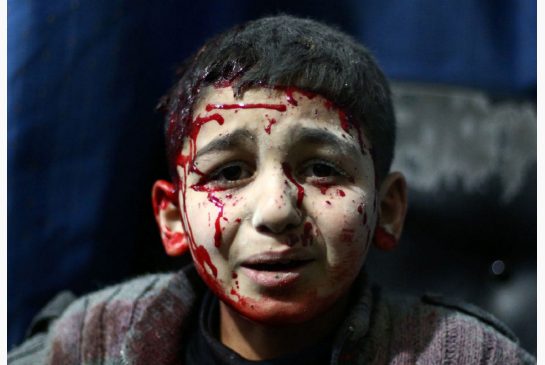 March 21, 2015 8:36 pm 0
Reconciliation without Assad
Shia Terror-Backing President
The worst place in the world? Aleppo in ruins after four years of Syria war

Syria’s civil war has passed the four-year mark, with 220,000 dead. But the West barely seems to care — a position that may one day haunt us

Attention, students. This is a snap “news” quiz. Everyone please stay in place. No time to lunge for your smartphone. Or scramble for your unread copy of The Economist. Or sit beside that tiresome smartass who seems to know everything. Your simple task is to answer this question:

“On the basis of the following 10 criteria, which top-secret international news story are we referring to?”

Time’s up, students. What is your answer?

Last Sunday, Syria’s bloody civil war entered its fifth year. If we needed a reminder about that — and, let’s face it, we do — it came on Tuesday when the criminal regime of President Bashar Assad was accused of carrying out a chlorine gas attack against a rebel-held town in northwest Syria. The attack was said to have killed at least six people, including children who were gasping for breath. Amateur videos posted online, widely regarded as authentic, showed children stripped of their clothes lying on hospital beds as doctors tried to revive them.

Even if this attack by Assad’s forces is confirmed, precious little will come of it. Earlier this month, the UN Security Council approved a resolution that threatened military action if toxic chemicals such as chlorine are used in Syria. But Russia, as Assad’s leading ally, is certain to block any action.

That is a microcosm of the wider nightmare. Syria has become an intractable proxy war among the major powers — Russia, Iran, the Gulf states, U.S. and Europe — and the region’s other interests. Therefore, what happens to individual Syrians, in the crassness of global realpolitik, doesn’t matter a whit.

The devastation inflicted upon Syria in the past four years has plunged the country into darkness. It was scientists at Wuhan University in China who calculated the disappearance of 83 per cent of Syria’s lights. According to Xi Li, who headed the project: “These images help us understand the suffering and fears experienced by ordinary Syrians every day.”

David Miliband, the former British foreign secretary who now heads the International Rescue Committee, said the lack of global attention to Syria will one day haunt the world: “Syria is entering the dark ages, literally and metaphorically. The use of barrel bombs, torture, targeting of aid workers and doctors rolls back centuries of progress.”

So much of the global indifference toward Syria’s crisis comes from a blindness of root causes and a complacent belief that actions don’t have consequences.

We also saw that in 2003 when the United States and Britain stumbled into Iraq without a plan or vision, thus creating so much of the turmoil evident today. And, sadly, we are seeing that this week in Israel with the re-election of a prime minister who foolishly seems to believe that the world will tolerate an apartheid Israeli state.

How many more innocent people will have to die before our political leaders abandon their delusions?