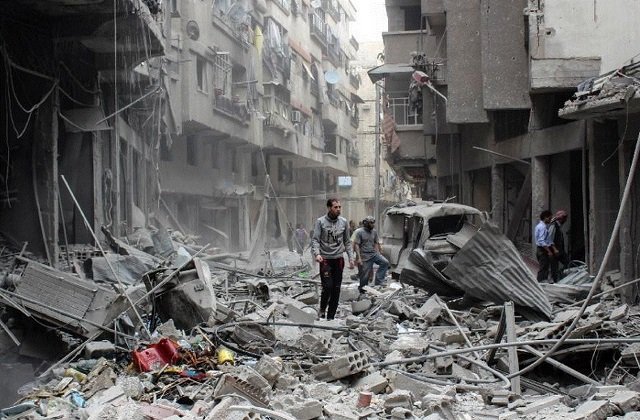 When We Defeat ISIS, Others Will Replace It

This is why when we defeat ISIS, there will be others to fill the vacuum as long as violent regimes like Assad are left to shower death and destruction upon innocent civilians.

In a new report, the rights group said some 163,000 people in the region were engaged in an “agonizing struggle to survive.”

Eastern Ghouta has been under government siege for nearly two years, with regime forces tightening the blockade in recent months.

The restrictions have caused a dire humanitarian situation, with food and medical shortages in the opposition bastion east of the Syrian capital.

In addition to the restrictions on the ground, Eastern Ghouta is regularly subjected to government aerial bombardment.

Amnesty said it had evidence of “war crimes” committed by the government in Eastern Ghouta, and that the regime’s siege of the area combined with “unlawful killing of its besieged civilians” amounted to “crimes against humanity.”

For many in Eastern Ghouta, life “has become a prolonged experience of hardship and suffering,” said Said Boumedouha, acting director of Amnesty’s Middle East and North Africa program.

“By repeatedly bombing heavily populated areas in a series of direct, indiscriminate and disproportionate attacks as well as by unlawfully besieging civilians, Syrian government forces have committed war crimes and displayed a sinister callousness towards Eastern Ghouta’s civilians.”

Amnesty said it documented at least 60 aerial attacks on Eastern Ghouta in the first half of 2015 that killed around 500 civilians.

“The timing and location of these attacks appear deliberately orchestrated to maximize damage or civilian casualties in a gruesome attempt by the Syrian government forces to terrorise the population,”.

The report described the effects of the government’s blockade on the area, accusing Syria’s government of using “starvation as a weapon of war.”

It said residents accused the group of hoarding food, and that it was also behind abductions and arbitrary detentions in response to Assad attacks.

“Widespread violations by the Syrian government do not excuse the appalling behaviour of the Army of Islam, who have also waged indiscriminate attacks, failed to protect civilians and deprived them of access to food or medical care,” Boumedouha said.

“Civilians of Eastern Ghouta are essentially caught in between two hostile sides vying for their own gain.”

Amnesty repeated previous calls for full humanitarian access in Syria and for the conflict to be referred to the International Criminal Court.

When We Defeat ISIS, Others Will Replace It