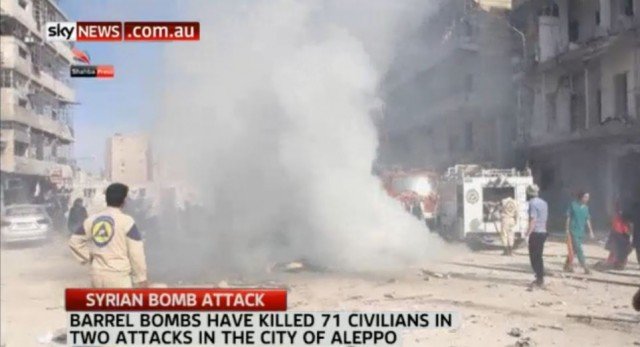 The Assad regime is collapsing faster than anyone can tell. Recent gains by the rebels in areas within 30 km of Assad’s Alawite strongholds, in addition to Russia on the verge of abandoning the Assad regime officially, Assad is resorting to exacting revenge on the people of Syria who dared challenge his tyranny. These are the last barrel bombs Assad will drop on civilians.

Assad’s barrel bombs that killed 72 people in Aleppo yesterday are the last breath of a dying regime. It is the last arrow in Assad’s quiver still aiming for the hearts of the people he and his father terrorized for 45 years. Assad’s rule is coming to an end, and yesterday’s barrel bomb attacks may be the last barrel bombs Assad will drop on Syrian civilians.

Yesterday’s barrel bombs are going to be, probably, among the last barrel bombs Assad will drop on civilians. For this regime to spend its last breath on killing civilians shows the extent of its savagery and barbarism. With this regime gone, Syrians are breathing better and hoping for a better Syria.

Once the regime collapses totally, the real work will begin. Aleppo may have experienced yesterday the last barrel bombs Assad will drop.

With Assad gone, Russia will have no excuses anymore not to unite with the U.S. and Saudi Arabia to defeat ISIS and any other terror organization trying to exact revenge upon the minorities.

As Saudi Arabia helped usher Rafik Hariri in Lebanon, a moderate Sunni leader, so it will in Syria to allay any fears the minorities may have and to insure stability, the pillar of its foreign policy, is established in a war zone they way it helped establish it in Lebanon in 1992 after 17 years of a ravaging civil war.

Within the Assad wider circle, there are probably anywhere from 150 to 1,000 Assad regime hacks and thugs who will have to answer for their crimes. Our guess Syrians will follow these criminals to the edge of hell to make them pay if necessary, and we agree with this concept 100%.

As the Mossad pursued Nazi criminals, so will Syrians pursue the Assad criminals.