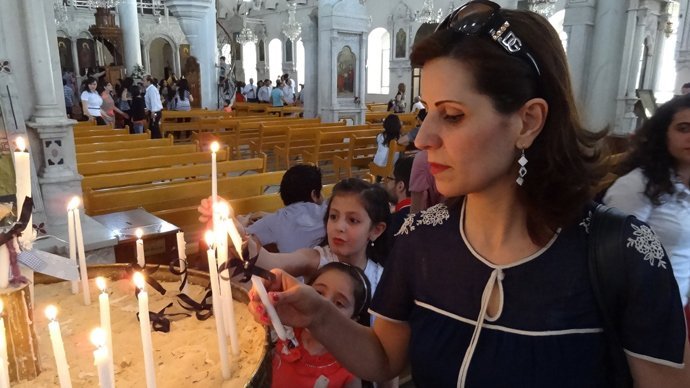 April 16, 2015 11:17 am 0
Over Perfuming Obama Foreign Policy
For Heaven’s Sake, We Are the United States of America
Shia Terror-Backing President

It used to be that the Christians of the Middle East could rely on the US to protect them from the onslaught of Islamic extremism and violence, but today Obama has abandoned them to the pack of wolves between the Assad regime and ISIS. His timidity in defeating both has defined his legacy.

Only Israel is the true friend of all minorities in the Middle East. Just live in Jerusalem for a week to understand the liberties one has under the Israeli Government. All religions are respected and all people are free to practice their faith free from terror.

“Israel is rightly seen as a place in which Christians enjoy a safer life than in all other countries in the region.”

For those of you who believe Baschar al-Assad, Ali Khamenei, or Hassan Nasrallah are friends of Christianity, revisit the terror the Assad regime exacted on the Lebanese Christian politicians and journalists who defied his regime of tyranny. Just look at how the Assad regime, to save its own neck, implicated the Christian communities of Syria to join his battle for his rule instead of abnegating as the Druze communities did.

Today, Syrian Christians need US help to defend themselves from not only ISIS, but the Assad regime and Iran. Many of them, I would imagine, wish for a Lebanese order in Syria where inter-faith communities co-exist without violence. Such order is impossible unless the US take serious and aggressive steps to help define Syria the way France defined Lebanon by distributing ideological and religious powers to be shared as equally before it pulled out after WWII. Unlike France, Barack Obama is pulling out leaving havoc and destruction behind him.

To achieve a Lebanese order, both Assad and ISIS must be defeated with force, not just ISIS. By striking ISIS only, Obama has been instrumental in feeding the fires of sectarianism as the Arab world perceived his strikes against ISIS as siding with Shia terror against Sunnis in general (He still ignores Assad barrel bombs and gassing of Syrians).

Whether Obama will ever regret trusting Iran, even as the region collapses into chaos and the Christian communities suffer, is a doubtful thought. Hindsight, the US could have gained so much more had Obama been less ignorant and more pro-active about the positive roles US allies play in the region. All the violence and chaos we see today is the result of Obama abandoning our US allies who kept vigilant over Iranian land grabs and expansionist ambitions, as well as over al-Qaeda and the likes of ISIS.

Syrian Christians need US help. They are caught between two evils in Syria.

History will not be kind to Obama. We do not know of one European or Arab leader who is willing to praise Obama publicly. Many, in fact, blame him for their new terror threats resulting from his Syrian policy. We would be willing to even bet that no one is hated more than Barack Obama in every corner of the world for his ignorance, arrogance, and malignance.

He will soon find out after he leaves office and tongues begin to unleash.

The Dangers of Make-Believe Foreign Policy
To Obama, or not to Obama
Is USS Roosevelt in Yemen to intercept Iran or Israel?
Slippery Barack Obama 976