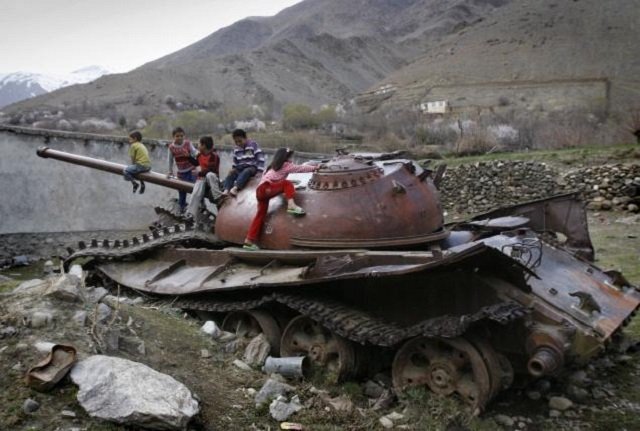 Russia Will Turn Syria Into Another Afghanistan

September 7, 2015 9:13 pm 0
If Putin Thinks Syria Will Be Less Painful Than Afghanistan
Obama is Gatorade to extremism
The Crisis of ISIS

Reports circulating in recent days quoted unnamed Western diplomats saying a Russian expeditionary force is already in Syria to prepare for the arrival of an “aerial contingent” of fighter jets and attack helicopters for “strikes against ISIS targets in Syria.”

With Russian jets targeting all of Assad’s enemies, not just ISIS, Russia will turn Syria into another Afghanistan by indiscriminately killing Muslim civilians. Those reckless acts committed during the invasion of Afghanistan in the 1980’s gave rise to al-Qaeda, the Taliban, and Sunni terror in general.

Russia is about to repeat its Afghanistan stupidity at the expense of Europe this time around. Russia will turn Syria into another Afghanistan.

Putin sees in Obama a feckless and weak president intent, come hell or high water, on remaining on the sideline when it comes to the tragic civil war in Syria. It matters little to Barack Hussein Obama how many Syrian lives are lost or how many Syrian refugees are displaced. This is tantamount to a green light for Putin to destroy whatever left of Syria under the excuse he is defeating ISIS.

Along with ISIS, Putin will defeat every opposition to Assad bar none. Especially, those moderates Assad fear the most. And in the process, Putin will turn Syria into another Afghanistan.

Gulf Arab countries must react to this new dangerous development because a win in Syria will embolden Iran to further stir the Houthis in Yemen. Unless, Saudi Arabia traded Syria for Yemen with Iran and Russia, which is probable if Russia is moving into Syria while the Gulf countries have been mum about it.

If the Gulf countries do not equip the moderate rebels with Stinger missiles to limit the damage Russian helicopters and fighter jets may cause against the legitimate Syrian opposition and women and children Putin will kill with ease, then we know the Gulf countries may have sold Syria for Yemen.

Russia will turn Syria into another Afghanistan if the Gulf countries do not react. The new Syria will be far more dangerous to ruling Gulf families than they think.

Barack Obama will not act or lift a finger to stop Putin. He will watch from the sidelines his Syria policy sink under the weight of his ignorance and lack of foresight.

While Obama is in power, many are reluctant to criticize a president known for his dirty Chicago tricks. But after he leaves office, historians are not going to be kind to a president who has twisted Syria and its tragedy to serve his rhetoric and political agenda.

Syria is the victim of two men complicit in its destruction: Baschar al-Assad and Barack Hussein Obama. One pulled the trigger and the other simply watched women and children perish without skipping one heart beat.

Now comes Putin who will completely destroy the country while Obama plays golf.

Russia Will Turn Syria Into Another Afghanistan