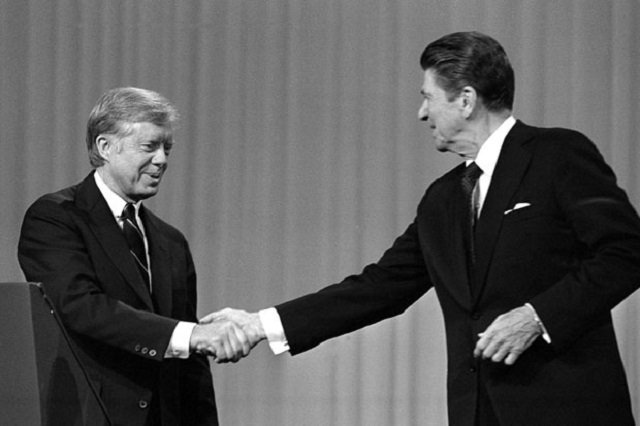 Presidential debates are boxing matches, not beauty contests. The voters want to see their candidates jab their way into winning. They win by showing us how mentally fit they are to hold the highest office in the land, but also by jabbing their opponents into a state of fatigued submission when they question each other’s abilities to lead.

The satisfaction many Americans are getting from Trump’s jabs on immigration, our Veterans, and the overall direction of the country is separating him from the field because he is a virgin politician. Americans have been asking why the status quo is acceptable to our political elites and Trump is calling them for the same thing by name and by act. Trump is us putting our politicians on trial.

As such, Donald Trump is the best jabber in the business. In presidential debates, he is going to be the Mohammad Ali among his peers, and those who dare mock his candidacy or ignore his questions about the poor state of affairs of America he will sting them like a bee.

Yes, we can circle Pluto and discover planetary system thousands of light years away, but we cannot educate our youths to be competitive. We rank 14th in this category, but 4th in spending on education. We rank number one in only one category; the number of prisoners incarcerated. This is the result of failed politicians.

America has lost its will to fight terror. Look at the Iran deal giving terror more room and more funds to expand. Look at us ignoring ISIS until it was too late. Look at us calling domestic terror workplace violence. America is lost, and Obama was instrumental in us losing our way.

Americans are tired of feeling like second class citizens in a world where danger lurks at home and abroad and where our greatness is questioned constantly. We hope these presidential debates will give birth to strong leadership.

This is why Trump is triumphant ahead of these presidential debates. He is letting our politicians have it the way each one of us would like them to have it.

We are tired of the United Nations making decisions for us. We are tired of a White House that ignores laws. We are tired of seeing our national debt become unmanageable. We are tired of watching this great nation become an easy target for terrorists and rogue nations. We want to feel, smell, see, hear, and touch greatness again. The type we felt when Ronald Reagan was president forcing Russia into a corner or when John F. Kennedy stared Khrushchev down during the Cuban Missile Crisis.

Barack Obama was elected president riding the coattails of two words: Hope and change. He delivered non-substantive speeches that were vague on policy and got away with it by always claiming that his candidacy is about hope and change. That was his signature left jab, which knocked Hillary Clinton off her high horse, John McCain, and Mitt Romney from ever contesting his fast track towards the White House.

Donald Trump signature punch is to make America great again, which is resonating widely. Because he is not a politician with no record to defend, his jab is most effective when exposing the weaknesses of other politicians and their records. We saw what he did to poor John McCain with regard to his oversight over the Veterans Affairs Administration and the deep problems this agency has.

We hope these presidential debates provide us with hope that after Obama America is on its way back defending freedom and liberty, caring for its Veterans and their families, and putting a new sign on its White House that read: “Beware the bulldog inside this house”.