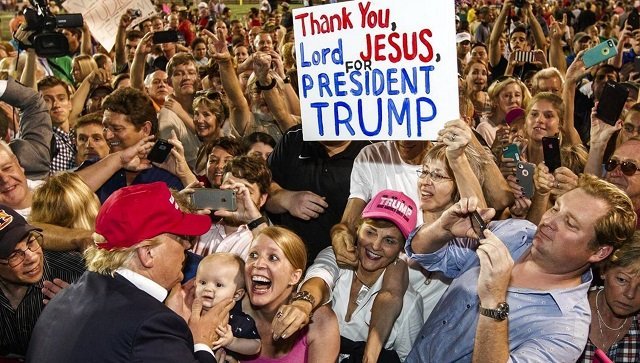 The Donald and the Demagogues

Source: The Wall Street Journal – by Bret Stephens (The Donald and the Demagogues)

If you have reached physical maturity and still chuckle at Mr. Trump’s pubescent jokes about Rosie O’Donnell or Heidi Klum, you will never reach mental maturity. If you watched Mr. Trump mock fellow candidate Lindsey Graham’s low poll numbers and didn’t cringe at the lack of class, you are incapable of class. If you think we need to build new airports in Queens the way they build them in Qatar, you should be sent to join the millions of forced laborers who do construction in the Persian Gulf. It would serve you right.

Since Mr. Trump joined the GOP presidential field and leaped to the top of the polls, several views have been offered to explain his popularity. He conveys a can-do image. He is the bluntest of the candidates in addressing public fears of cultural and economic dislocation. He toes no line, serves no PAC, abides no ideology, is beholden to no man. He addresses the broad disgust of everyday Americans with their failed political establishment.

And so forth and so on—a parade of semi-sophisticated theories that act as bathroom deodorizer to mask the stench of this candidacy. Mr. Trump is a loudmouth vulgarian appealing to quieter vulgarians. These vulgarians comprise a significant percentage of the GOP base. The leader isn’t the problem. The people are. It takes the demos to make the demagogue.

There will be other opportunities to write about the radical affinities and moralizing conceits of Democrats and liberals. For now let’s speak plainly about what the Trump ascendancy says about the potential future of the Republican Party and the conservative movement.

It says that we may soon have a conservative movement in which the American creed of “give us your tired, your poor” could yield to the Trumpian creed that America must not become a “dumping ground” to poor immigrants from Latin America, as if these millions of hardworking and God-fearing people are a specimen of garbage.

It says that a movement that is supposed to believe in defending old-fashioned values and traditions against the assorted degradations of the postmodern left might allow itself to be led by a reality-TV star whose meretricious tastes in trophies, architectural and otherwise, mainly remind me of the aesthetics of Bob Guccione.

It says that many of the same people who have bellyached nonstop for the past seven years about the cult-of-personality president currently in the Oval Office are seriously willing to consider another cult-of-personality figure on the off-chance he’s peddling the cure America needs. Focus group testing by pollster Frank Luntz suggests that Mr. Trump’s fans could care less about his flip-flopping political views but responded almost rapturously to his apparently magnetic persona.

When people become indifferent to the ideas of their would-be leaders, those leaders become prone to dangerous ideas. Democracies that trade policy substance for personal charisma tend not to last as democracies. They become Bolivarian republics. Donald Trump may be America’s Hugo Chávez, minus the political consistency.

Because the Republican Party has not lost its mind—at least not yet—I doubt that Mr. Trump will be its presidential nominee. A single bad poll could break him. The summer before an election-year summer tends to be a political clown-time. Voters, like diners in a fancy restaurant, may entertain the idea of ordering the pigeon, but they’ll probably wind up with the chicken.

Still, Mr. Trump’s political star is rising in a period when fringe politics, both on the right and the left, are making a comeback in the West. Marine Le Pen in France. Beppe Grillo in Italy. Jeremy Corbyn in Great Britain. Bernie Sanders in the Democratic Party. Every now and then some of these characters get into office. Look at Viktor Orbán in Hungary, or Alexis Tsipras in Greece.

Republicans like to think of America as an exceptional nation. And it is, not least in its distaste for demagogues. Donald Trump’s candidacy puts the strength of that distaste to the test.

The Donald and the Demagogues