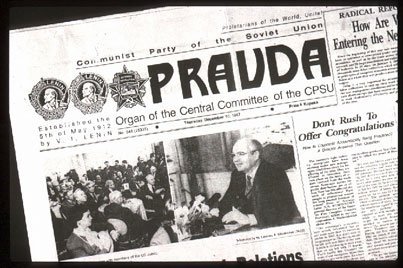 July 10, 2013 9:38 am 0
The Next Breeding Ground for Global Jihad
Secretary Clinton Needs Her Own Margaret Thatcher Moment
When we elect an ignorant president

Credit Putin with more Chutzpah than imagination. Without even blinking, the man who is reconstructing the Soviet Union issued a report in which it accuses the rebels of carrying out WMD attack on themselves.

Here is how NYT described the report:

“Russia said Tuesday that its scientific analysis of a suspected chemical weapons attack in Syria on March 19 showed it probably had been carried out by insurgents using sarin nerve gas of “cottage industry” quality delivered by a crudely made missile. The finding contradicted conclusions presented by Western nations, including the United States, that the Syrian government had been responsible.”

Only the Soviets can combine the oxymoronic words “cottage” and “missile” in the same sentence.

There is good news and bad news attached to Putin’s accusation.

During the Cold War, the CIA conducted a study to determine why more Soviet workers read Pravda than Izvestia, the two highest circulating papers at the time.

After pouring over coverage, circulation, types of articles, color of ink, size, and on and on, the CIA was mystified as to why Pravda was more popular. After all, they both covered the news in similar fashion with many of their stories repeating themselves in both newspapers.

After the Soviet collapse, the CIA discovered that Pravda was more popular because it printed few more pages than Izvestia did, which became quite handy as toilet paper after a delicious meal of stale cabbage and cold potatoes.

Putin seems nostalgic for Russians to put his report for good use again.

The Syrian rebels have been fighting the Soviet Empire with all its glory to include its MIG jets, its T-72 tanks, its cluster bombs, its SCUD missiles, and its propaganda.

Welcome back to the future of Russia’s Putin.

Did Syria and Iran Instigate the Benghazi Attack?
CIA suffers intelligence gaps in Syria
Amiri for the 3 Americans? Or is Amiri a Plant?
Syrian Revolution 1335