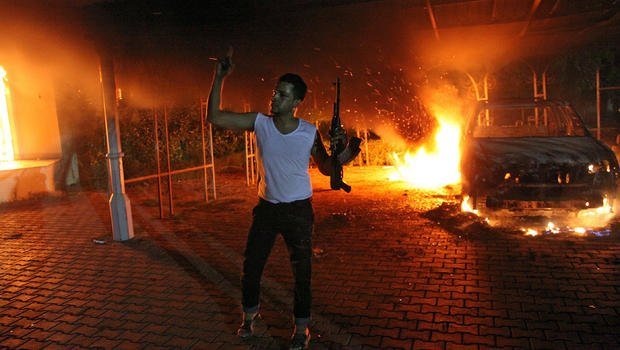 Did Syria and Iran Instigate the Benghazi Attack?

Published for the Times of Israel (Did Syria and Iran Instigate the Benghazi Attack?)

There is a pattern forming in the Benghazi attack that centers on the motives behind it if one considers seriously the notion that the CIA may have been running guns to the Syrian Rebels.

If so, Syria and Iran may have been behind the attack on Benghazi, and the reason why America is hiding this fact from the public rests on Mr. Obama’s unwillingness to point the finger at both States sponsors of terror for fear it would damage him politically for pressing to engage with Iran diplomatically. After all, how could Mr. Obama justify, not only his policy of engagement, but also the cover-up that ensued?

Such a revelation would cause immense political harm because of the steps his administration took after the attack in misleading everyone about why, and who were the perpetrators behind it.

If Mr. Obama knew Iran and Syria were behind it and instead spread lies to protect both States sponsors of terror, in my opinion, this could lead to impeachment; as well as damage the reputation of ex-Secretary Hillary Clinton and reduce her chances for 2016.

Those in the media protecting Obama from this scandal may be more interested in protecting Ms. Hillary Clinton, whose 3am campaign ad during the 2008 Democratic Primaries still resonates amongst many, but whose actions on Libya may harm her credibility as a Commander-in-Chief able to protect Americans.

More elements of this pattern can be detected also in the discovery that the CIA has forced all the employees involved in the Benghazi tragedy to sign additional NDA’s (Non-Disclosure Agreements), on top of NDA’s already signed as part of their standard employment process at the CIA, to prevent them from disclosing any information to Congress or the media. According to US Congressman Darrell Issa, the Chairman of the House Committee on Oversight and Government Reform, it is illegal under the law to silence or intimidate Federal Employees in an on-going probe by the US Congress.

Further to the above, the US Congress, for almost 11 months, has had no access to any of the CIA or US State Department staff injured during the attack after many unsuccessful attempts to invite them to testify.

Why is the President keeping the US Congress in the dark about what happened in Benghazi the night of September 11, 2012?

Could it be that the CIA is aware that Syria and Iran may have instigated the attack on the US Embassy and the CIA annex to interrupt the flow of weapons to the Syrian Rebels? Why is the FBI investigating this tragedy has yet to interview any of the Ansar al-Sharia’a terrorists in Libya when CNN is able to interview them for hours so easily?

As far as influencing Ansar al-Sharia’a, both Syria and Iran have an impressive record of cooperating with Sunni extremist groups like Hamas and al-Qaeda. In fact, the attack was so well planned it seems implausible that a State may not have been behind its precise planning.

Common sense though says that a number of high officials in the Libyan Government may know the truth and I think the US Congress should send a high-powered delegation led by powerful Senators to find the underlying cause of the Benghazi cover-up in Libya. Considering Mr. Obama is not helping the Syrian people defeat Assad may be an opportunity to extract from the Libyan leadership the truth.

The more Mr. Obama keeps a lid on the Benghazi scandal, the more rumors will swerve around it until the truth comes out.

Maybe that is why Mr. Obama is going on the charm offensive using the American public as human shields to protect his reputation by attempting to convince all of us the scandals are phony.

Did Syria and Iran Instigate the Benghazi Attack?