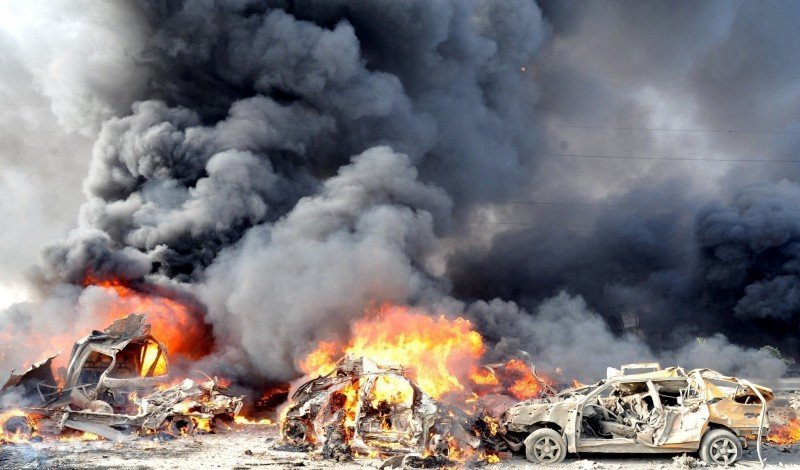 Assad Fate is a Foregone Conclusion

February 19, 2015 11:15 am 0
Assad Must Go Dead or Alive
Collapse of the Assad Syrian Army is Imminent
ISIS Will Strike Repeatedly if Obama Keeps Ignoring Assad’s Terror

Many have asked the quintessential question when it comes to terror of what would it take and whom to target to eradicate its plague. Besides actually fighting the terrorists directly, which has been the MO of a fearful west, what else can we do to decimate its root causes?

I am one who believes lack of education and economic opportunities across the Arab world are the two main drivers that supply the violent men with the simpletons to seed terror. Others believe that an aimless life, even in the bosom of material comfort, is leading men astray. No matter the answer, the ready supply of Jihadists requires an instigator to spark the violence. Supply without the spark is like Snow Mountains without a spring season.

In our war against terror, the West may have finally reached the same conclusion: Concentrate all of our efforts upon the instigators. They are the ones who create the conditions for terror to take root. They are the ones who train, hide, forge, and employ terror for their own purposes. Without the instigators, the would-be jihadists may just be sleepers waiting out the clock of their lifetime.

The West, in my opinion, has concluded that Baschar al-Assad is an instigator that must be eliminated. Bear with me as I make my logic stick, and show that Assad fate is a foregone conclusion.

During 2011, Assad resorted to threatening the West if it stood by the rebels (Rami Makhluf infamous threats in a New York Times interview). Which it did. To make good on his threats, Assad released hardcore Islamists who ultimately formed the nucleus of ISIS. He then bought oil from them, and empowered them to become the danger ISIS is today to Western interests in the Levant and in their own backyard.

His success is really his demise. What kind of signal does a third-rate tyrant and a mass murderer send if he found the perfect formula to scare the West out of its mind and threaten its interests at home directly, yet remain in power to threaten again at will? How foolish would America be to let Assad survive as a lesson to other would-be instigators?

Assad, if I know how America functions, is a dead man walking. There is no way in hell, after his ISIS ambush, Assad will survive to tell the world about his anti-Western exploits. Assad crossed the line and he is about to pay for it big time.

True that this is not what you read. True that the pressure against Assad seems to decrease, not increase. This, however, is window dressing. To describe the US position today vis-a-vis Assad, find that description in Sun Tzu’s eternal words:

When strong, avoid them. If of high morale, depress them. Seem humble to fill them with conceit. If at ease, exhaust them. If united, separate them. Attack their weaknesses. Emerge to their surprise.

How, who, and when are the mysterious elements yet to be revealed. However, we may have a glimpse on the “when” because of a small article Reuters published on February 18 in which it details the success of the CIA training select Syrian militants over several years. Knowing how the CIA works, my guess is that the numbers and the dates are veiled to keep Assad off balance. His army replacement will be the nucleus of a strong, pro-western Syrian army being trained for this upcoming job.

The “who” has been decided as well. The man to replace Assad is a known quantity with superb military training and pro-western attitudes, trusted by his peers and the Syrian people.

The “how” is a mystery but this should not surprise us at all. Assad has been weakened by the civil war in Syria, which means choices over the entry point are countless.

Assad dug his own grave when he forged and formed ISIS. From my perspective, Assad fate is a foregone conclusion. His latest desperate interviews at toning down his rhetoric and extending a hand of cooperation with the West are nothing but an attempt at reversing the Assad fate that awaits him.

Is it too much to ask for a Syrian el-Sisi to rule over Syria? Someone respected, trusted, and loved by his people yet unwilling to tolerate terror of any kind?

It is high time Syria got its wish.

Assad Fate is a Foregone Conclusion