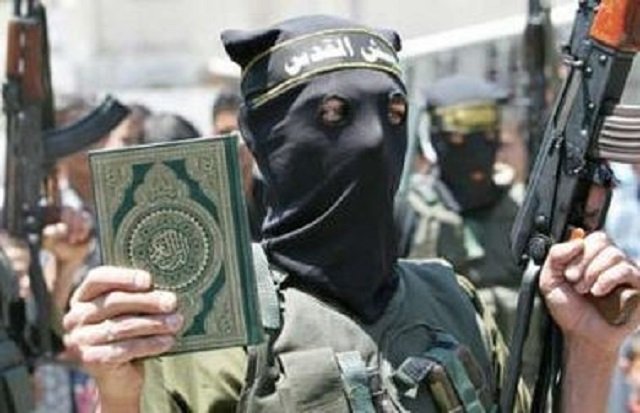 October 9, 2013 7:49 am 0
Barbarism Knows No Limits in Aleppo
Iranian General Was Killed by ISIS Near Aleppo
With Obama’s Secret Help, Assad Encircled Aleppo

Is Jihadism on steroids in the Middle East?

“America ignores the rebels at its peril. Yet on the left and right, anti-interventionists argue against American airstrikes, or any serious military aid, because such assistance would abet al Qaeda-linked jihadists. Perhaps what these anti-interventionists don’t realize is that the president and Congress may have already done their part to create the most deadly Islamic movement since the Taliban merged with al Qaeda in the 1990s.”

Consider nature in Syria abhorring the vacuum left by the US to abandon us not with one enemy, the Assad regime, but with a newly revitalized one in more Islamist extremism and fundamentalism. Under this US administration of President Barack Obama, US enemies threatening US interests continue to multiply. How does that give us comfort when Mr. Obama ignores this double threat in the hope he can show he is stopping Iran from building a nuclear device is beyond me? One does not trade a sure thing for a wish. In some circles, this is called irresponsible gambling.

We have always argued that Sunni Muslims of the Levant (Syria and Lebanon) are the most moderates in the Arab world. We have co-existed peacefully with minorities for centuries even though the relationships have not always been a model for equality and mutual respect on the part of the majority Sunnis. However, discriminating against a group of people because of their ethnicity exists all over the world and we do not need to go into explaining the tensions prevalent between the different Christian faiths to make a point here.

We can assure our readers though that the discriminatory practices Sunni Muslims pursued do not warrant oppressing, torturing, and killing the Sunni Syrian Muslims the way we see it happen constantly today with one Arab carrying out attacks against another or one faith ethnically cleansing another.

“To be sure, Syrian Sunni culture is vastly more cosmopolitan and urbanized than Afghan Sunni culture. Syria is where Arab Bedouins first became polished men of arts and letters and transformed Byzantine architecture into a Muslim motif that defined Islamic elegance for centuries. But the shocking satellite photos of a constantly bombarded Aleppo, the center of Sunni Syria since the 10th century, ought to warn us how quickly society can be transformed – no matter how sophisticated.”

The war Assad is waging against Aleppo within the framework of a 40-year plus oppression the Assads practiced against Sunni Muslims for their past sins of discrimination put us in a comfort zone of acquiescing to an unnatural phenomenon the way we acquiesced to Saddam oppressing the Shia in Iraq.

The difference though is that when it exploded in our faces, no one was ready to accept its abhorrent status. At the first sight of Jihadists entering Syria, non-intervention became the word of the day by some of the very same people who pushed for Iraqi freedom. Their calls for non-intervention doubled-over in Syria, but this time with words the President of the United States willed comfortably because of his ideology of “Laissez-faire” when it comes to foreign interventions.

The same did not happen when Iranian extremists infiltrated a weakened Iraq after Desert Storm. No warnings of non-intervention in Iraq were ever demanded or proposed.

“If the U.S. is able to save Syrian Sunni society from the cancer that Assad has created, Western air power will be required to neutralize the regime’s huge advantage in artillery and chemical weapons, which Assad will surely keep in reserve, despite any pledges he makes to the United Nations. The weapons provided through CIA covert action will unlikely be sufficient to knock out the regime’s huge inventory of Soviet and Russian heavy weaponry.”

No Sunni Muslims deserve to live under the oppressive regiment of an Assad-like regime — the same way we believed no Shias ought to have lived under the oppressive regime of Saddam — when these Sunni Muslims happen also to be far more moderate than the enemies we all face. With non-intervention, we killed the last hope of a majority faith rooted in a volatile region. Left is a sea of enemies not only of Islam for its politicization but also of all other faiths by breeding a 7th Century mindset to unite globally under a Muslim Caliphate. Suddenly Jihadism on steroids has become the norm.

To quote President Reagan, are we better off today than four years ago? A good question to ask the non-interventionists now that their policy stands trial all naked and all spin-less.

If freedom is the goal, picking it apart to serve some and not serve others really serves our enemies at the end of the day. Especially when that freedom is facilitated in countries where the Muslim Brotherhood movement began or another with 97% majority disposed to extremism while ignoring Syria with over 80% of its population either minorities or moderate Muslims.

Anyone else thinks how insane the last five years have been with Jihadism on steroids?