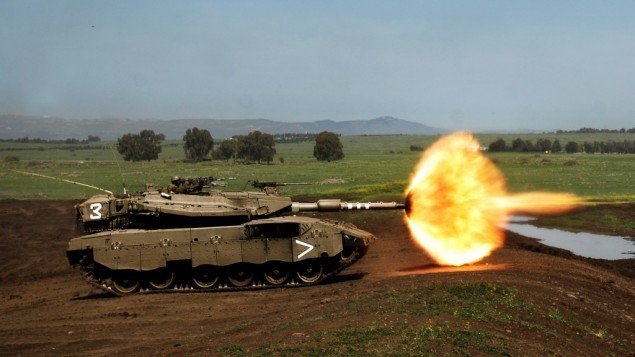 Prime Minister Benjamin Netanyahu on Tuesday warned Syrian Bashar Assad that Israel would respond forcefully if any attempt to harm the country is detected.

“The State of Israel is ready for any scenario. We are not part of the civil war in Syria but if we identify any attempt whatsoever to harm us, we will respond and we will respond in strength,” Netanyahu said after a meeting with his security advisers, his second in as many days.

The prime minister’s pointed remarks were the latest in a string of saber-rattling statements issued by Jerusalem and Damascus, with both sides threatening military action if they were struck.

Syrian Foreign Minister Walid Moallem said in a press conference earlier on Tuesday that Syria would fight back in case of a US strike, and Khalaf Muftah, a senior Baath Party official, said Monday that Damascus would consider Israel “behind the [Western] aggression and [it] will therefore come under fire.”

While Israel would almost certainly take no direct part in a military strike, Israeli intelligence information is widely believed to have played a central role in forming the US’s adamant conviction that Assad’s regime fired chemical weapons at civilians outside Damascus last Wednesday, killing at least hundreds of people and wounding over a thousand, according to Syrian rebel groups.

A large delegation of senior Israeli security officials is currently in Washington holding talks with top administration officials led by US National Security Adviser Susan Rice. The Israeli team, headed by Netanyahu’s outgoing National Security Adviser Yaakov Amidror, also includes senior Defense Ministry official Maj.-Gen. (Res) Amos Gilad, the head of the IDF’s Planning Directorate Nimrod Sheffer, and the head of the IDF’s Military Intelligence Research Branch Gen. Itai Brun. It was Brun, the IDF’s top intelligence analyst, who in April shocked the international community by declaring that the army was quite certain that Assad had used chemical weapons against rebel forces in Syria in March.

In his speech Monday, portending US-led military intervention and excoriating Assad’s regime for its “inexcusable” chemical strike, Secretary of State John Kerry stated flatly that “chemical weapons were used in Syria” and indicated that the US had received “additional information about this attack, and that information is being compiled and reviewed together with our partners.”

A statement issued by the White House Monday noted that the Israeli team in Washington also discussed Iran and other regional issues with their American counterparts, and that the meeting was part of a series of regular discussions within the framework of the good relations between the two countries.

Israeli military officials have indicated they believe it unlikely that Syria would target Israel if the US or others intervened, because an Israeli response could bring down the Assad regime, but Israel has reportedly been taking security precautions just in case.