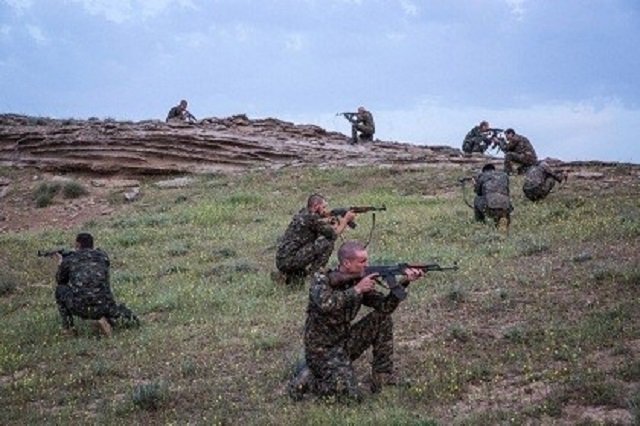 October 12, 2015 12:02 pm 0
What Happened to the Legendary Syrian Army?
Collapse of the Assad Syrian Army is Imminent
Hollande Vows to Crush ‘Army of Fanatics’

Syria’s leading Kurdish militia and several Arab rebel groups that have fought alongside it have formalized their alliance in a new group called the Syrian Democratic Forces.

The formation of the alliance comes after Washington said it was abandoning a plan to train and equip rebels to fight the Islamic State group and could provide the U.S. with a new partner in the battle against the jihadist group.

The alliance was announced in a statement published online by a spokesman for the Kurdish People’s Protection Units (YPG).

“The sensitive stage through which our country Syria is passing and the rapid developments on the military and political front… require a united national military force for all Syrians, including Kurds, Arabs and Syriacs and all others,” the statement said.

The alliance includes several Syrian rebel groups that have backed the YPG in battles against IS, including the mostly-Arab Burkan al-Furat group.

Groups representing Arab tribes and Syriac Christians are also listed as participating in the new force. Muslims and Christians form a joint army.

Washington has already partnered with the YPG to battle IS in parts of northern Syria, with the U.S.-led coalition providing Kurdish forces with air cover as they fought the jihadists on the ground.

But the growing strength of the YPG has rattled neighbouring Turkey, which considers the group a branch of the outlawed Kurdistan Worker’s Party.

And the strong ties between Washington and Syria’s Kurds have also caused resentment among other Syrian rebel groups who have lobbied for U.S. air support and weapons.

The YPG has had several successes in ousting IS from areas of northern Syria, backed by groups like Burkan al-Furat.

In January, they pushed IS out of the border town of Kobane after four months of fighting and heavy U.S.-led airstrikes.

And in June, they seized the key town of Tal Abyad from the jihadists, depriving them of a main transit point on the way to their de facto Syrian capital Raqa.

Much of the Syrian opposition has regarded the Kurds with suspicion because of the careful line they have walked since the uprising began in March 2011.

Despite years of repression by Damascus, they declined to take up arms against the regime and have instead focused on building autonomous governance in Kurdish-majority regions.

Collapse of the Assad Syrian Army is Imminent
Hollande Vows to Crush ‘Army of Fanatics’
What Happened to the Legendary Syrian Army?
Assad Must Go 61 Syria News 1072 Syrian Revolution 1348