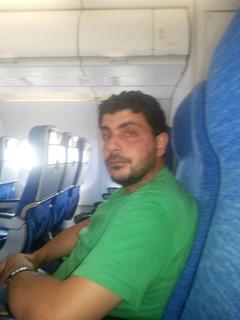 Morocco deports Syrian refugee and his young son to Istanbul on Wednesday, after they were stranded in Casablanca Airport for over 24 hours.

A picture taken on the plane shows 38-year-old Bashar wearing a green T-shirt, unshaven and with red-ringed eyes.

Bashar’s brother, Harle, told AFP on Wednesday that the pair had no Turkish money, no passport or mobile phone, and did not speak any Turkish.

Bashar is married to a Moroccan national, and has legal residence in the country.

However, his son Haider, from a previous marriage, had been living in Turkey with relatives.

Haider’s mother died years ago and the boy was being looked after by his aunt, who died 15 days ago.

Bashar, who had previously made two failed attempts to get a Moroccan residency permit for his son, flew to Turkey aiming to collect Haider and bring him to the family home in Casablanca.

“He was very upset when I last spoke to him – he just wants to be with his father.”

Bashar’s other three-year-old son has lived in Morocco his entire life and has Moroccan residency.

Haider’s Turkish residency permit has expired and, according to local laws, the boy will not be allowed back into the country for five years, leading his father to fear that they could be deported to Syria where he is wanted by the government after defecting from Assad’s armed forces to the rebel Free Syrian Army.

The Free Syrian Army are moderate elements of the opposition.

It is unlikely that Turkey, which currently hosts an estimated one million Syrian refugees, will deport the pair although both Lebanon and Jordan have been known to take the step.

Morocco, meanwhile, hosts just over 3,000 refugees and asylum seekers, according to UN figures.

While Syria’s neighbours have been far more hospitable to Syrians than has Europe, which has as yet accepted only small numbers of refugees, the ongoing crisis is putting an increasing strain on services and community relations in countries like Turkey and Lebanon.

Lebanon took the unprecedented step in early 2015 of requiring refugees from over the border to secure a visa before crossing the border, while in Turkey large numbers of Syrian families, including small children are now living on the streets.

Further afield in the Middle East, Syrian refugees have frequently struggled with visa restrictions when attempting to flee to safety.

In May, MEE reported the story about Wael al-Sahlee and his son; Palestinians living in Syria who were eventually deported to Jordan, after being stuck at an airport in the UAE for over two weeks.

Once Bashar and Haider touch down in Istanbul on Wednesday evening, family member Harle Mar says he is not sure what they will do next.

Bashar is the main breadwinner for his family in Morocco where his wife is currently expecting their second child.

Struggling With the Syrian Kurdish Aspirations
Turkey: 400,000 Syrian Children Not in School
Who Will Perish First ISIS or The Moderate Syrian Opposition?
Things That Matter 382