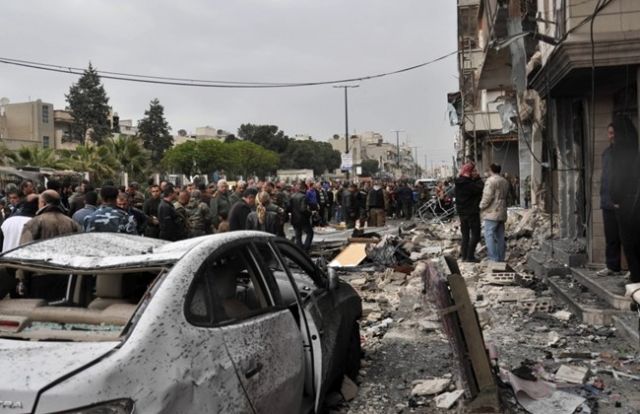 Hallelujah! Fanatics Are Killing Each Other

At least 19 ISIS fighters were killed Wednesday in an attack on an Alawite village in the central Syrian province of Homs that also resulted in the death of 3 Assad fanatics.

Activists on the ground said that three pro-regime militants were also killed repelling the attack on the village of Jub al-Jarah. Hallelujah! Fanatics are killing each other.

Had the Assad Forces not known in advance about the attack, more would have been killed.

The attack on the village in the northeast of the province came early Wednesday, with violent clashes breaking out after the extremists tried to storm the area.

“National Defense Forces and other pro-regime militias battled IS fighters with each side shelling the other. At least 19 Islamic State members were killed… along with three National Defense Force fighters, and six people were wounded, including a child and two women.”

Hallelujah! Fanatics are killing each other.

Jub al-Jarah lies northwest of the ancient city of Palmyra, which was captured by ISIS on May 21, and the group is also to the west of the village, in neighboring Homs province.

Its residents, like Bashar al-Assad, mostly belong to the Alawite sect, an offshoot of Shiite Islam that ISIS considers its enemy.

In another incident, on Tuesday night, two ISIS suicide bombers killed 10 Syrian soldiers in the northeastern city of Hasakeh.

The same activists said. Hallelujah! Fanatics are killing each other.

A third suicide bomber hit a post manned by the Kurdish security forces in the city, causing serious damage to buildings in the area but no deaths.

Control of Hasakeh, which is ethnically mixed, is divided between Syrian troops and Kurdish forces.

On May 30, ISIS launched a bid to enter the city, but was pushed back after violent clashes with Syrian troops and Kurdish fighters.

More than 300,000 people have been killed in Syria since the conflict began with anti-government protests before spiralling into a war after a regime crackdown.

Hallelujah! Fanatics Are Killing Each Other