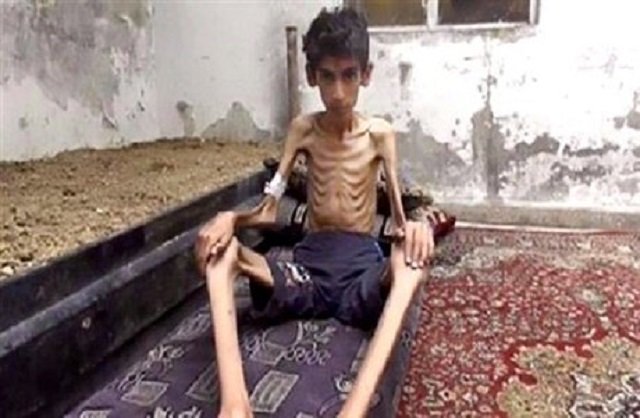 Madaya is Another Auschwitz Without the Ovens

Twenty-three people have died of starvation in the besieged Syrian town of Madaya since December 1, Doctors Without Borders said Friday. Madaya is another Auschwitz without the ovens, and Assad is another Hitler without the mustache.

The U.N. said there were 40,000 people — half of them children — who needed immediate lifesaving assistance in Madaya, where access has been restricted by pro-regime forces.

Damascus on Thursday gave permission for U.N. agencies to send relief to the town, following reports of starvation deaths among civilians, many of whom have been displaced from the neighboring rebel stronghold of Zabadani.

Doctors Without Borders, known by its French acronym (MSF), said that of the 23 people who died of starvation, six were less than a year old, and five were above 60.

The deaths occurred at the local MSF-supported health center, the charity said.

Another 13 people who tried to escape in search of food have been killed when they stepped on landmines laid by regime forces or were shot by snipers.

“This is a clear example of the consequences of using siege as a military strategy… There is no way in or out, leaving the people to die.”

Medics had been forced to feed children with medical syrups as the only available source of sugar and energy, he said, describing Madaya as “effectively an open air prison” for nearly half of its residents.

Madaya is another Auschwitz without the ovens, and Assad is another Hitler without the mustache. How dare you say Assad should not be removed from power?

“The situation is ghastly,” said U.N. rights office spokesman Rupert Colville, indicating that details of the casualties and the extent of the suffering in Madaya were difficult to verify given the limited access.

Madaya is Another Auschwitz Without the Ovens