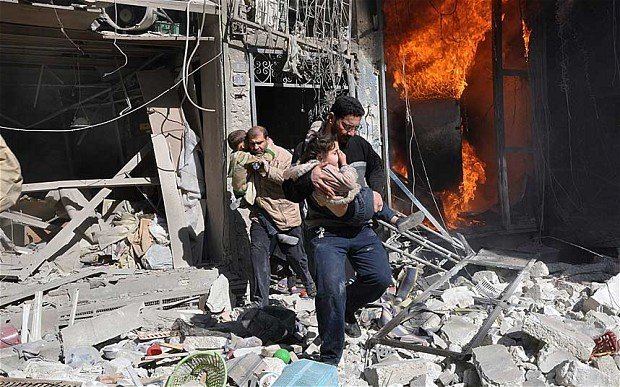 It’s hard to get our minds around the dimensions of the slaughter underway in the Middle East and Africa, and harder still to see that the battlefields of Egypt, Syria, Iraq, Afghanistan, Somalia, Nigeria and Mali are pieces in a global war in which we are targeted.  For the most part, the deep thinkers zero in on the single battlefields.  What if anything should we do about the big fight in Egypt?  Should we assist the Syrian opposition?  What to do in Lebanon or Jordan? Should we respond positively to the Iraqi government’s request for security assistance?  Is anyone thinking hard about Tunisia, likely to be the scene of the next explosions?

It could not be otherwise, since our government, our universities, our news organizations and our think tanks are all primarily organized to deal with countries, and our analysts, policy makers and military strategists inevitably think inside those boxes.  We don’t have an assistant secretary of defense for global strategy (FOOTNOTE:  actually we do, his name is Andrew Marshall, he’s a sprightly genius of 92 years, and he runs a largely ignored corner of the Pentagon called “Net Assessment”), but we do have one for the Near East and South Asia.  And there’s hardly a professor in America who is talking about the fundamental change in the nature of global affairs in which we are enmeshed, the paradigm shift from the post-World War II world dominated by the United States and the Soviet Union, to…we know not what.

So there’s a global war, we’re the main target of the aggressors, and our leaders don’t see it and therefore have no idea how to win it.

Any serious attempt to understand what’s going on has to begin by banning the word “stability,” much beloved of diplomats and self-proclaimed strategists. If anything is fairly certain about our world, it’s that there is no stability, and there isn’t going to be any.  Right now, the driving forces are those aimed at destroying the old order, and their targets (the old regimes, very much including the United States) have until recently showed little taste to engage as if their survival depended on it.  But things are changing, as always.

The war is easily described:  there is a global alliance of radical leftists and radical Islamists, supported by a group of countries that includes Russia, at least some Chinese leaders, Iran, Syria, Cuba, Venezuela, Bolivia, Ecuador and Nicaragua.  The radicals include the Sunni and Shi’ite terrorist organizations and leftist groups, and they all work seamlessly with the narcotics mafias.  Their objective is the destruction of the West, above all, of the United States.

What if they win?  Some of them want to create a  (Sunni or Shi’ite) caliphate, others want Castro- or Kim-style communist dictatorships.  Like the five Mafia families in The Godfather, they have made their war plan, but, as with the Corleones and the Barzinis, they are riven by disagreements, some of which are fundamental.

War is foggy, and alliances are often very unstable, especially at moments when the whole world is up for grabs.  Look at Egypt, for example.  At one level, it’s a sectarian fight:  the “secular” military vs. the “Islamist” Muslim Brotherhood.  So nobody should be surprised when the Brothers burn churches and murder Christians.  But the top military dog, General Sisi, has some pretty impressive Islamist credentials.  Indeed, his elevation at the time of the Brothers’ purge of Mubarak’s generals was frequently attributed to his close ties to the Brotherhood.

I don’t think anyone nowadays would call him a friend of the Brothers.  So what happened?  Did he go secular all of a sudden?  Was his “Islamism” a trick from the get-go?  Or is “Islamism” less monolithic than some suppose?  A Saudi of my acquaintance showed up in Cairo a few days ago with a bunch of checks, some currently cashable, others postdated over the next twelve months, all hand-delivered to Sisi and his guys.  Their advice to the Egyptian military is to mercilessly crush the Brothers, and their advice will likely be adopted, both because the junta knows that death awaits them if they lose (2 Egyptian major generals and 2 brigadier generals, along with many colonels, have been assassinated by the Brothers in the current spasm), and because only the Saudis can foot the huge bill facing Egypt just to provide the basics for the people.  Most of whom, to the evident surprise of Western leaders and journalists, seem inclined to support the junta (neighborhood militias have taken on the Brothers throughout the country, for example).

So we’ve got an indubitably Islamist regime–the Saudi Wahhabis–supporting a military junta whose leader is famously Islamist against the infamously Islamist Muslim Brotherhood.  Yes, they may well all yearn for the destruction of the infidel West (although the junta impiously pockets our dollars), but for the moment the struggle for power trumps the power of the faith.

Notice that this bloody confrontation has nothing to do with the celebrated Sunni-Shi’ite war that is so often invoked to “explain” current events.  It’s all happening within Sunni Egypt (although the Shi’ite Iranians are certainly meddling–surprise!–on behalf of the very Sunni Brothers).  And there are plenty of “foreign fighters,” just as there were in Iraq, just as there are in Afghanistan:  in the last 8 days, according to usually reliable sources in Cairo, 253 Uzbeks, 21 Yemenis, 40 Afghans and 11 Turkmens have been arrested, along with  126 Hamas operatives, who bring weapons and train pro-Brotherhood Egyptians.

ANOTHER FOOTNOTE:  During the Cold War, Ignazio Silone mused that the last war would be between the Communists and the ex-Communists.  Maybe the Middle East is now the scene of a war between Islamists and ex-Islamists, or between pious Muslims and not-so-pious ones, or even between Muslims and ex-Muslims.  In this context, we should ban the use of the word “moderate,” along with “stability”…

Does that picture give you mental cramps?  Then move on to Syria.  You’ve got Bashar Assad on top in a neighborhood of Damascus, supported by Iran and Russia, fighting against a variety of insurgents including al-Qaeda units, Salafists, former members of Assad’s military, and the usual mob of adventurous souls, including Americans and Europeans, who believe they are waging jihad in the name of Allah.

Assad is actually a figurehead; the real capital of Syria is in an office of the Iranian supreme leader, Ali Khamenei.  A leader of the Syrian opposition made this clear, saying that Hezbollah and Iran were the real powers in Syria, and there’s plenty of evidence for his assertion, including dead Hezbollahis and Quds Forcers.

So al-Qaeda’s fighting Iran in Syria, right?  That fits nicely into the Sunni vs. Shi’ite meme, thereby relieving a mental cramp or two.  But wait:  our very own Treasury Department, which is as good as we’ve got when it comes to deciphering the crazy quilt network of global terrorism, told us in no uncertain terms a couple of years ago that there was a secret deal between AQ and the mullahs.  Moreover, the tidal wave of terrorism that has crashed on Iraq is universally termed a resurgence of al-Qaeda in Iraq, which has been Iranian-sponsored since Day One (just ask the late unlamented Abu Musab al-Zarqawi, sent to paradise by U.S. Special Forces).  Which gives us a big mental cramp indeed:  an Iranian (Shi’ite)-sponsored (Sunni) al-Qaeda assault against (Shi’ite) Iraq, and right next door an Iranian-assisted (Sunni) al-Qaeda, alongside other (mostly Sunni) foreign and domestic fighters against a (kinda Shi’ite) regime under the control of (totally Shi’ite) Tehran.

Who’s on first?  Is Iran sponsoring AQ in Iraq and killing AQ next door in Syria?  Is it some sort of trick (Iran using AQ to penetrate the opposition in order to have some control over whatever follows a defeat of the current Syrian regime, for example, or a deception, using AQ in Syria to subvert the opposition)?