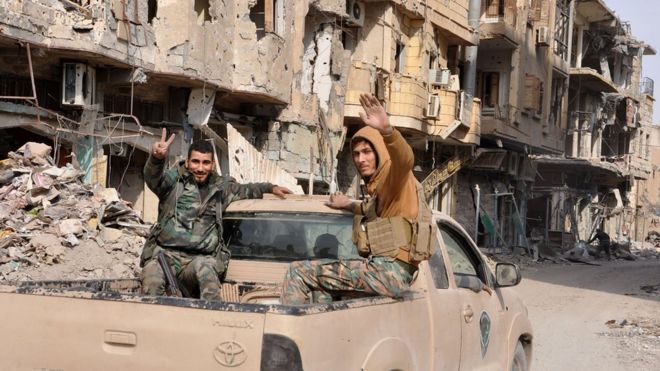 November 9, 2017 6:52 am 0
Obama Nixed CIA Plan That Could Have Stopped ISIS
Pentagon Threatens Turkey Over the Kurds
Turkey Flexing Muscles in Syria

There is a reason to rejoice the capture of the last ISIS strongholds in Syria. After all, ISIS has, as the Assad regime is still doing, killed thousands of civilians, Assad informers, and innocent minorities who refused to convert to Islam. However, ISIS decimation, as some have been citing, is premature; the more likely scenario is that the terrorist organization will be heading underground to plan more attacks against the west.

In Syria, a war monitor told AP that Islamic State militants have withdrawn from their last stronghold following a government offensive that lasted months.

The Britain-based Syrian Observatory for Human Rights says government forces and allied troops, including Iraqi fighters, are combing Boukamal, a strategic town on the border with Iraq, on Thursday after IS militants retreated.

Syrian pro-government media say Syrian troops had clashed with remnants of IS militants in the town after they entered it late Wednesday. On Thursday, they declared the town totally free of the militants.

The fall of Boukamal means remaining IS militants are currently holed up in small towns and villages along the border with Iraq and in the Syrian desert.

Egyptian president Abdul-Fattah el-Sisi is convinced the ISIS fighters are heading to Libya where they will attack Egypt through virtually open borders. Egypt is home to a large Copt Christian population whose ancestors in the Eastern Orthodox Church lived in Constantinople before it was Islamicized and renamed Istanbul by the Ottomans in 1453 A.D.

If ISIS is planning to make Libya its new underground home, ISIS access to Libyan oil may pose a problem for the west. Libya remains under U.S. sanctions.

Terrorist organizations that lose their open battles against their enemies have the tendency to continue waging their wars in disguise. We have seen this happen in many parts of the Middle East where terrorists make tunnels and caves their homes in pursuit of a lost cause. ISIS will not be different.