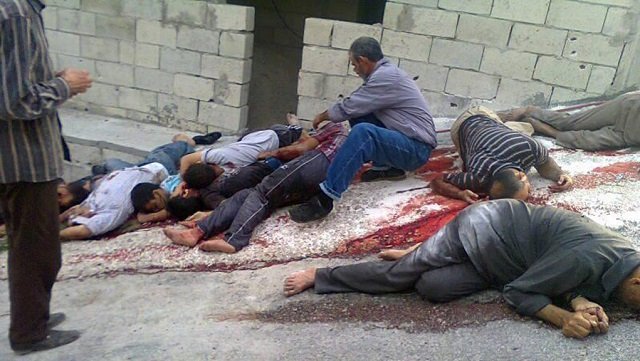 June 27, 2013 11:56 am 0
What Some Arabs Tell Their Children
New Reports Detail Assad’s Brutal Tactics in Syria
If The Middle East Was a Shopping Mall, Arab Lives Would Be The “For Sale” Signs

There has to be a number that even the angriest of Syrians must come to terms with because with every life lost, on both sides, all of us lose equally.

Not only Syrians must ask this question, but also all the foreign powers involved directly in this war’s perpetuity. What is the cost/benefit analysis driving the Russian absolute support for Baschar al-Assad, one individual? His Kremlin’s net worth must have a ceiling even though I am highly skeptical the Kremlin”™s calculation is based on lives lost.

Even the Obama administration, in supporting feebly the Syrian opposition, must ask itself this very question considering we heard officials from this administration admit, on several occasions, that Assad’s resilience took them by surprise, which makes you wonder about the assumptions used to calculate the timing of his demise.

In the wake of these lost Syrian lives, calculating the real future cost for Syria looks gloomy indeed. Even if you consider all the mixed marriages, the liberal-minded Syrians unfettered by race or religion to hold a grudge based on either, or the mothers who see children dying, not people glorifying death out of hate.

Syrians must detach themselves from what the world wants to see happen and reflect on what we want to happen to us, and the moment we start honestly calculating the cost of Baschar al-Assad to Syria will be the moment reconciliation and healing begin, even if we are powerless over his destiny.

All this tragedy to save the life of one person who could be replaced by another as protective of all Syrians but without the baggage.

Financial Times or Food Times?
Did We Reach the Limit of Syrian Tragedy?
Do Unto Others..
Opinions 796 Syrian Revolution 1347