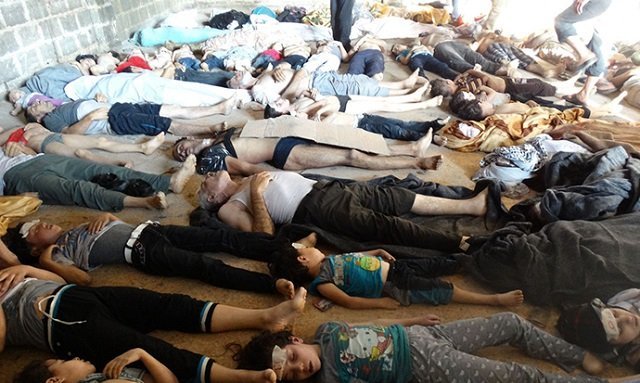 How much more deception can you take from Barack Obama?

If someone had to rip open the 2014 State of the Union address of Barack Obama in pursuit of fallacies, misleading statements, outright lies, and deception, we may yet discover it may be the worst address when it comes to the honesty and the integrity of our Commander-in-Chief.

The grace and the power of the White House have diminished so much and so often over the last five years that any other elected president, short of an Al Capone, will be able to restore the White House to its eminence on the world stage just for being who they are.

Because Syria is our turf, here is just one example of the deception practiced by President Barack Obama. In his State of the Union address, he said:

“American diplomacy, backed by the threat of force, is why Syria’s chemical weapons are being eliminated, and we will continue to work with the international community to usher in the future the Syrian people deserve – a future free of dictatorship, terror and fear.”

When you said the latter Mr. President, did you mean you wanted to usher the future we see in the photograph below sir? This happened under your watch Mr. President and history will judge you harshly no matter how much spin we will be subjected to after you leave the Office.

As far as the chemical weapons are concerned, your words were quite misleading. How much more deception should we take from Barack Obama?

Reuters reported exactly at 6:37pm, about 21 hours after you began your address that about 4% of the chemical weapons you are taking so much credit for their removal have been actually removed. Almost 12 hours after Reuters broke the story on Syria’s chemical weapons, Reuters again published an article entitled “U.S. accuses Syria of stalling on chemical arms handover” in response to the sudden outrage from the US State Department.

Are you saying Mr. President that prior to your State of the Union, you did not know that about 4% of Syria’s chemical weapons were removed? That, again, you found out through Reuters?

Touting success of Syria’s CW’s removal to some 33 million Americans when utter failure describe it far better is just testimony to what you have done to this great White House.

GRAPHIC CONTENT
A handout image released by the Syrian opposition’s Shaam News Network shows bodies of children and adults laying on the ground as Syrian rebels claim they were killed in a toxic gas attack by pro-government forces in eastern Ghouta, on the outskirts of Damascus on August 21, 2013. The allegation of chemical weapons being used in the heavily-populated areas came on the second day of a mission to Syria by UN inspectors. It was promptly denied by the Syrian authorities. AFP PHOTO/HO/SHAAM NEWS NETWORK

How much more deception can you take from Barack Obama?

The Obama-Khamenei alliance
Will he backtrack again?
Lessons in Isolationism
Slippery Barack Obama 976