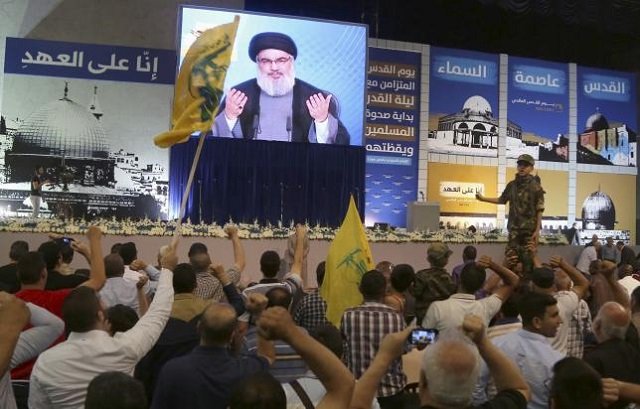 July 25, 2015 6:02 pm 0
Stratfor: Get Your Act Together
To Save Austin Tice
The Mother of All Stalemates in Syrian Civil War

In his first public remarks since the agreement was reached this month in Vienna, Hassan Nasrallah said he was sure Tehran would confound critics who say it would end support to Hezbollah.

In a way, Nasrallah words were intended for Hezbollah rubbing Obama’s weakness in our faces.

“We deal with every trust and complete assurance over this,” Nasrallah said in ceremony to honor sons and daughters of fallen Hezbollah fighters.

“Iran’s relationship with its allies is based on ideological grounds and come before the political interests,” Nasrallah said. Hezbollah rubbing Obama’s weakness will not sit well with Congress as its members began reviewing the Iran deal.

U.S. sanctions against three Hezbollah military leaders whom Washington said were involved in operations in Syria would have no impact on the group, Nasrallah said.

“We have no investment accounts..these measures will not change things either way,” Nasrallah said.

The three leaders – Mustafa Badr Al Din, Ibrahim Aqil, and Fu’ad Shukr – were named for their role in coordinating or participating in the group’s support for Assad’s government in Syria’s civil war, the U.S Treasury said.

It also included a businessman in Lebanon who was sanctioned for procuring weapons for Hezbollah and shipping them to Syria.

“The United States is the Great Satan before and after the deal,” he said. Rub, Nasrallah, rub.

U.S. President Barack Obama and Secretary of State John Kerry have said they are troubled by support from Iran for regional proxy groups such as Hezbollah. Their sense of trouble comes after seven years of watching Iran and Hezbollah terrorize the region.

Both think the American public is stupid.

Nasrallah said his group was proud of Tehran’s financial backing, which allowed it to stand up to Israel and U.S. policies in the region. Hezbollah rubbing some more.

Hezbollah’s support has been crucial to Syria’s Assad in the four-year-long Syrian conflict, which has forced Nasrallah to make these appearances to explain his policies killing poor and helpless Lebanese Shiites who have no interest killing Syrians.

Nasrallah lives most of the time in a bunker cave for fear his life of terrorism might be taken away.

Assad Massacres 25 Women and Children in Douma
Will the Russians Kill Maher al-Assad?
Did you know Hezbollah was pregnant?
Iranian Terror 512