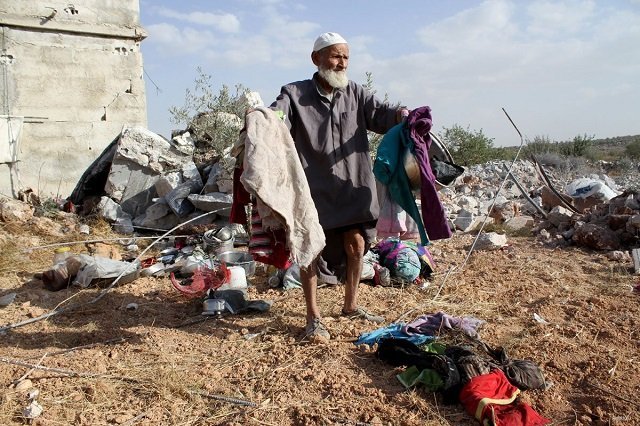 FSA to Russia: Stop Bombing Us Before Speaking of Helping Us

October 25, 2015 4:40 am 0
Why Wasn’t Obama Better Informed?
Of Vacuums and Mass
The invisible Sunni heat against Obama

Syrian rebels fighting under the banner of the Free Syrian Army told Russia: Stop bombing us before speaking of helping us, and rejected Moscow’s idea of elections they suspect are aimed at keeping the psychopath Baschar al-Assad in power.

In comments marking a shift in Russia’s position, Foreign Minister Sergei Lavrov said on Saturday the Russian air force, which has been bombing insurgents in Syria since Sept. 30, would be ready to help the “patriotic” Syrian opposition.

He also said the Kremlin wanted Syria to prepare for parliamentary and presidential elections – an idea which one leading rebel called “illogical and unrealistic” with so many people forced from Syria, in jail, or pursued by the government.

The rebels’ skepticism towards Russian policy underlines the huge challenges facing any attempt to revive diplomacy as they battle major offensives from the Syrian army and its regional allies Iran and Hezbollah, with Russian air support.

John Kerry, U.S. Secretary of State, for his part has been either in cohort with his Russian counterpart or so compliant as to yield to Russia on any issue.

“Russia must firstly stop bombing the headquarters of the Free Army before offering air support that we haven’t asked for.”

In other words, stop bombing us before speaking of helping us

Russia’s call for elections was insincere, he said. “It means they are asking for Assad to stay in an interim period.”

Groups affiliated to the FSA have been eclipsed in much of Syria by jihadists including the al Qaeda-linked Nusra Front and the Islamic State group – the stated target of the Russian intervention in the war.

But a considerable number of FSA fighters still exist, led mostly by former Syrian military officers who defected from the army. Some have received foreign military support, including training from the Central Intelligence Agency.

They have been supplied with weapons from states opposed to Assad via Turkey and Jordan. Assad’s foreign opponents include Gulf Arab states and Turkey.

Some have received U.S.-made anti-tank, or TOW, missiles – the most potent weapon in the rebel arsenal. The FSA does not operate with a centralized command structure.

Earlier this month, a Russian air strike destroyed the main weapons of one such group, Liwa Suqour al-Jabal, which has been fighting both Islamic State and government forces near Aleppo.

“I will not talk to my killer,” Hassan Haj Ali, the head of the rebel group, told Reuters when asked about Moscow’s ideas.

Lavrov said Russia was ready to provide air support to the Free Syrian Army if the United States would help it identify where it was. Kerry would probably give up their locations in support of his friend the psychopath Baschar a-Assad.

Fadi Ahmad, spokesman for the First Coastal Division group that has been hit at least three times by Russian air strikes, said Russia must halt support for Assad. “After that we will think about cooperating with it,” he said.

Prominent rebel leader Bashar al-Zoubi said Russia must force Assad from power if it was serious about bringing about a solution to the war. “Holding elections is illogical and unrealistic because the Syrian people is either displaced, disappeared in prisons, or pursued by the regime,” he said.

FSA to Russia: Stop Bombing Us Before Speaking of Helping Us

The invisible Sunni heat against Obama
Assad Planting Operatives within the FSA
Message to the CIA: When the Attack Dog is at Your Throat, Don’t Fiddle with his Cage Key
Putin Terror 436