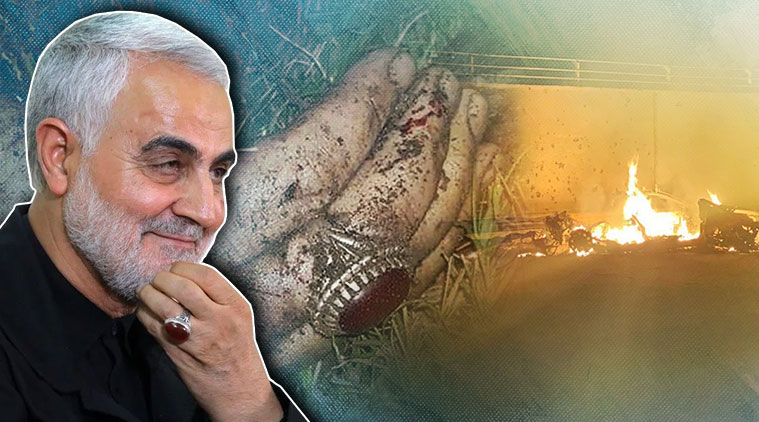 Falafel Interviews Soleimani After His Death

January 27, 2020 3:44 am 0
The Hariri Verdict Projects UN Complicity
The Good News and the Bad News For Lebanon
Hezbollah Turns Violent Against Protesters in Lebanon

No reporter in human history has been able to interview a dead terrorist before. Except Falafel. Been there, done that as far as Falafel is concerned. This time around, Falafel interviews Soleimani after his death while sipping tea in a totally dark place.

How, where, and how come do not matter. The super reporter from Syria has done it again. This is what Falafel reported back.

FALAFEL INTERVIEWS SOLEIMANI AFTER HIS DEATH

Falafel: General Soleimani, do you know what happened to you?

Falafel: President Trump ordered a drone strike on your convoy shortly after arriving to Baghdad.

Soleimani: Am I dead?

Soleimani: But I still have work to do. In Syria, Yemen, Iraq, and everywhere where America has forces. I still have plans for America that I did not fulfill. This is not fair.

Falafel: The world would like to know about your deeds in Syria. Can you tell us your inner thoughts now that it matters little?

Soleimani: Syria is a hell hole. I lost so many good men.

Falafel: I have information your men targeted Syrian women. Can you give us a glimpse of your accomplishments?

Soleimani: You mean the rapes?

Falafel: That and the killing.

Soleimani: The rapes are intentional to produce Shiite children. Part of my campaign to ethnically cleanse Syria of its majority Muslim Sunnis.

Falafel: What about the intentional targeting of women by your snipers?

Soleimani: That too. Especially the pregnant ones. Two Sunnis in one bullet. I personally gave hundreds of medals to my snipers who were able to kill the women and their unborn fetus in one bullet. Great bunch of guys. So proud of them!

Falafel: You said earlier that you had plans for America. What do you mean?

Soleimani: The great Satan. Oh, yes. I had such wonderful violent plans.

Soleimani: I don’t see why not now that I am dead. You see, I developed, with Russian help, a special gas that when inhaled would turn American soldiers on each other. All we had left to do was to deliver it in missiles on U.S. bases. Too bad, I am dead. It would have been an amazing sight to see U.S. troops killing each other.

Falafel: You said the Russians?

Falafel: What else were you planning?

Soleimani: We had a special treat for the Israelis. We were preparing to launch, simultaneously, from Lebanon, Syria, and Gaza thousands of missiles on Israel. To include their Dimona nuclear plant. We were just waiting for Assad to win his war.

ASSAD IS A FART

Falafel: What do you think of Assad?

Soleimani: A fart. Mentally, he is incapable of one coherent idea. The poor guy, he started stuttering in my presence. This is why he refused to meet me on several occasions. He would send his lieutenants instead. We were waiting for him to win his war on his own people to start our attack on Israel. But he could not. I saved his neck from the hangman.

Falafel: What about now? Do you think he is going to win?

Soleimani: Maybe. With Russian help and weapons. But don’t be surprised if he screws it all up again.

Falafel: Any message to take back to your family?

Soleimani: No. Not really.

Soleimani: Yes. Tell Khamenei to bring his own tea with him. Also, send my greetings to John Kerry. Great guy that helped us secretly a bunch of times.

The most violent man in modern history spoke his mind. Many are so glad to see him rot in some dark place. Thank you President Trump for sending him there.

Falafel Interviews Soleimani After His Death