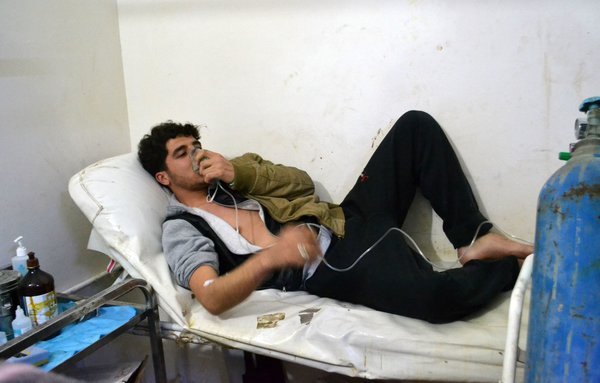 BEIRUT, Lebanon — Eyes watering, struggling to breathe, Abd al-Mouin, 22, dragged his nephews from a house reeking of noxious fumes, then briefly blacked out. Even fresh air, he recalled, was “burning my lungs.”

The chaos unfolded in the Syrian town of Sarmeen one night this spring, as walkie-talkies warned of helicopters flying from a nearby army base, a signal for residents to take cover. Soon, residents said, there were sounds of aircraft, a smell of bleach and gasping victims streaming to a clinic.

Two years after President Bashar al-Assad agreed to dismantle Syria’s chemical weapons stockpile, there is mounting evidence that his government is flouting international law to drop cheap, jerry-built chlorine bombs on insurgent-held areas. Lately, the pace of the bombardments in contested areas like Idlib Province has picked up, rescue workers say, as government forces have faced new threats from insurgents.

Yet, the Assad government has so far evaded more formal scrutiny because of a thicket of political, legal and technical obstacles to assigning blame for the attacks — a situation that feels surreal to many Syrians under the bombs, who say it is patently clear the government drops them.

“People are so used to it, they know from the sound,” said Hatem Abu Marwan, 29, a rescue worker with the White Helmets civil defense organization, a note of weary exasperation creeping into his voice when asked to explain. “We know the sound of a helicopter that goes to a low height and drops a barrel. Nobody has aircraft except the regime.”

Prodded by the United States, the United Nations Security Council isdiscussing a draft resolution that would create a panel, reporting to the secretary general, to determine which of the warring parties is responsible for using chlorine as a weapon, according to Council diplomats.

“The Security Council must address the need to determine who is responsible for using chlorine as weapons in Syria,” said an American official, who declined to offer specifics and requested anonymity to discuss continuing negotiations. “Doing so is critical to getting justice for the Syrian people and accountability for those who have repeatedly used chemical weapons in Syria.”

Syrian state media dismiss the allegations as propaganda, and the Council remains divided and hamstrung. That leaves people like Mr. Abu Marwan, who has responded to nine suspected chlorine attacks, feeling abandoned.

“There is no law to defend us as human beings, this is what we understand from the Security Council,” said Mr. Abu Marwan, a law school graduate, weeping as he recalled holding a dying child in Sarmeen. “I didn’t see in humanitarian law anything that says ‘except for Syrians.’”

In contrast to stronger toxins like nerve agents and mustard gas, chlorine is lethal only in highly concentrated doses and where medical treatment is not immediately available, making it more an instrument of terror than of mass slaughter. It is typically dropped in barrel bombs containing canisters that explode on impact, distributing clouds of gas over civilian populations, and is distinguishable by its characteristic odor.

So it falls under a kind of loophole. With many civilian uses, like purifying water or disinfecting hospitals, it is not banned under international law and thus was not on the list of chemicals Mr. Assad promised to destroy — though using chlorine as a weapon is forbidden.

The Security Council did condemn the use of chlorine as a weapon in Syria, in February. But with Russia, the Syrian government’s most powerful ally, wielding a veto, there was no Council agreement to assign blame.