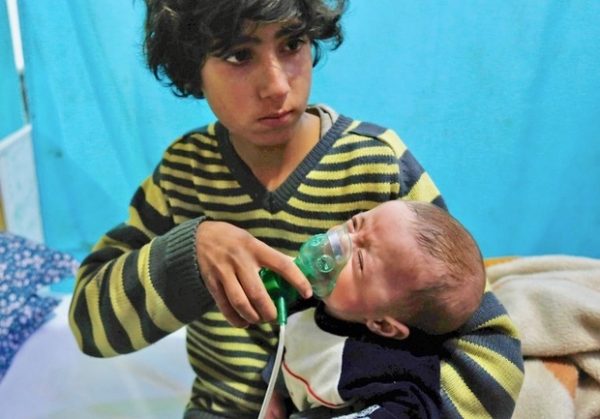 It was by far the most secretive Nobel Peace Prize ceremony ever held. There were no announcements, no press releases, and no media was invited with the exception of my friend Falafel. John Kerry receives Nobel Peace Prize, witnessed by Falafel for Kerry’s exceptional work in eradicating all chemical weapons in Syria.

After a short ceremony, Kerry thanked the Nobel Committee by giving each member a basket of Heinz Ketchup. Falafel then interviewed him.

Falafel: “Mr. Secretary, congratulations. How does it feel?”

Kerry: “It feels great Falafel. Who would have thought Syria instead of Vietnam? Hein? This is a glorious day indeed”

Falafel: “Mr. Secretary, how do you feel about the agreement you signed with foreign minister Lavrov to rid Assad of his chemical weapons, including his Chlorine Gas supplies?”

Kerry: “It feels great. No Syrian has died from any chemical weapons attacks because of my brilliant diplomacy. If any Syrian mother wants to thank me, please write me at: State Department ..

Falafel (Interrupting): “Mr. Secretary, we are receiving information Assad is still gassing his civilian populations. What says you?”

Kerry: “These are lies. Assad promised me he will never harm women and children.”

Falafel: “How do you explain documented videos of children suffocating from Chlorine Gas?”

Kerry: “Pure propaganda. I think some Syrian mothers have decided they don’t want me to get my Nobel Prize, so they have fabricated the death of their children. Syrian Sesame Street teaches children how to act dying from Chlorine Gas. Honestly! There is no Chlorine Gas in Syria. None. All because of me.”

Falafel: “Why did the Nobel Committee choose to make this ceremony top secret?”

Kerry: “My guess, Obama did not want the competition. But, who knows?”

Falafel: “What is next for you Mr. Secretary?”

Kerry: “My wife and I are taking our yacht out to the Mediterranean for some R&R. We already have the latest maps to avoid capsized emigrant ships. Can you imagine? Syrians fleeing Syria on board old ships when I offered them a free chemical weapons environment? Some ingrate!”

Falafel: “Mr. Secretary, are you in touch with Assad?”

Kerry: “In touch? He will be my guest on board our yacht ‘Ketchup Pileup’. Without his full cooperation and honesty, I would not be a Nobel Laureate, now would I?”

Israeli envoy: Nuclear Iran is a ‘thousand times’ more dangerous than ISIS
I don’t get the Jew haters
John Kerry is the Russian Ballerina Twisting in the Air Like a Chiffon Doll
Political Satire 120 Western Appeasement 469