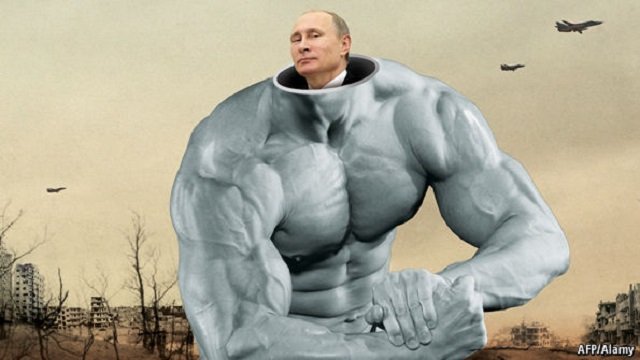 Source: The Economist (A Hollow Superpower)

Don’t be fooled by Syria. Vladimir Putin’s foreign policy is born of weakness and made for television

JUBILANT crowds waved Russian flags; homecoming pilots were given fresh-baked bread by women in traditional dress. Judging by the pictures on television, Vladimir Putin won a famous victory in Syria this week. After his unexpected declaration that the campaign is over, Mr Putin is claiming credit for a ceasefire and the start of peace talks. He has shown off his forces and, heedless of civilian lives, saved the regime of his ally, Bashar al-Assad (though Mr Assad himself may yet prove dispensable). He has “weaponised” refugees by scattering Syrians among his foes in the European Union. And he has outmanoeuvred Barack Obama, who has consistently failed to grasp the enormity of the Syrian civil war and the threat it poses to America’s allies in the Middle East and Europe.

Look closer, however, and Russia’s victory rings hollow. Islamic State (IS) remains. The peace is brittle. Even optimists doubt that diplomacy in Geneva will prosper (see article). Most important, Mr Putin has exhausted an important tool of propaganda. As our briefing explains, Russia’s president has generated stirring images of war to persuade his anxious citizens that their ailing country is once again a great power, first in Ukraine and recently over the skies of Aleppo. The big question for the West is where he will stage his next drama.

Mr Putin’s Russia is more fragile than he pretends. The economy is failing. The rise in oil prices after 2000, when Mr Putin first became president, provided $1.1 trillion of windfall export revenues for him to spend as he wished. But oil prices are three-quarters down from their peak. Russian belts have tightened further because of sanctions imposed after Mr Putin attacked Ukraine. Living standards have fallen for the past two years and are falling still. The average salary in January 2014 was $850 a month; a year later it was $450.

Mr Putin was losing legitimacy even before the economy shrivelled. Many Russians took to the streets in the winter of 2011-12 to demand that their country become a modern state with contested elections. Mr Putin responded by annexing Crimea and vowing to restore Russian greatness after the Soviet collapse—“the greatest geopolitical catastrophe” of the 20th century, he called it. Part of his plan has been to modernise the armed forces, with a $720 billion weapons-renewal programme in 2010; part to use the media to turn Russia into a fortress against a hostile West; and part to intervene abroad.

With action in Ukraine and Syria, he has made it appear that Russia is the equal—and rival—of America. That is not only popular among ordinary Russians but also contains a serious message. Mr Putin fears that Russia, in its weakened state, could be vulnerable to what he sees as America’s impulse to subvert regimes using the language of universal democracy. In both Ukraine and Syria, he believes, America recklessly encouraged the overthrow of governments without being able to contain the chaos that followed. He intervened partly because he fears that the revolutions there must be seen to fail—or Russia itself could one day suffer a revolution of its own.

So far his plans have worked. Beguiled by a pro-Kremlin broadcast media, ordinary Russians have been willing to trade material comfort for national pride. Mr Putin’s popularity ratings remain above 80%, far higher than most Western leaders’. But the narcotic of adventurism soon wears off. Since last October, the share of voters who feel the country is heading in the right direction has fallen from 61% to 51%. Russians tired of Ukraine; now Syria has peaked. Sooner or later, the cameras will crave action. Ukrainians are petrified once again.

What does this mean for the West? So far America, at least, has misunderstood Mr Putin’s aims. In the autumn Mr Obama predicted that Syria would be a Russian “quagmire”. Speaking to the Atlantic recently, he argued that Russia’s repeated resort to force is a sign of weakness. That is true, but not (as Mr Obama suggests) because it shows that Mr Putin cannot achieve his foreign-policy goals by persuasion. For him, military action is an end in itself. He needs footage of warplanes to fill his news bulletins. There will be no quagmire in Syria because the Kremlin is not in the business of nation-building.

Mr Obama thinks Russia should be left to its inevitable decline. Like a naughty child, Mr Putin is rewarded by American attentiveness, he believes. Yet, Syria shows how, when Mr Obama stands back in the hope that regional leaders will stop free-riding on American power and work together for the collective good, the vacuum is filled by disrupters like Iran and IS, and by Russia in its search for the next source of propaganda.

So the West needs to be prepared. It is welcome that America is strengthening its forces in Europe. NATO’s European members should show similar mettle by putting troops in the Baltic states—which will require a change of heart in countries, such as Italy, that see any display of resolve as needlessly provoking Russia. If there is trouble, NATO and the EU will need to respond immediately to show that Russia cannot prise open the collective-security guarantee that lies at the heart of NATO.

The biggest test will be Ukraine—a focus of Russian attention and also the country most like Russia itself. If Ukraine can become a successful European state, it will show Russians that they have a path to liberal democracy. If, by contrast, Ukraine becomes a failed state, it will strengthen the Kremlin’s argument that Russia belongs to its own “orthodox” culture and that liberal democracy has nothing to teach it.

Alas, America and the EU have Kiev fatigue. Instead of doing everything in their power to help Ukraine, they expect Ukrainian politicians to prove that they are capable of reform on their own. That is a mistake. They should be offering financial help and technical advice. They should help root out corruption. And they should be patient.

Eventually, deep Russian decline will limit its aggression. For the time being, however, a nuclear-armed Mr Putin is bent on imposing himself in the old Soviet sphere of influence. In Mr Obama’s last year as president, Mr Putin, fresh from Syrian success, could yet test the West one more time.

What Did King Salman and Putin Agree Upon on Syria?
Putin Willing to Help Obama with His Syria Problem
To Roll Back Saudi Intervention, Putin Orders Assad to Respect Ceasefire
Opinions 895 Putin Terror 426