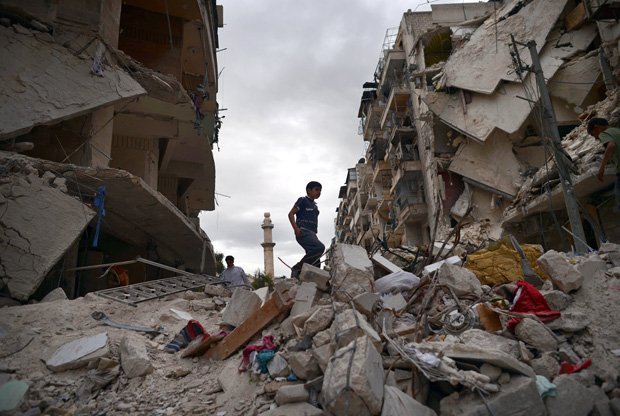 Who is not fighting whom in the Middle East?

April 15, 2015 10:51 am 0
What Will Change Iran Situation?
Of Masochistic Non Interventionists and Their Flying Saddles
Assad on the back foot

Would America permit Russia to establish its own paramilitary militias in the US and forcibly interfere to protect Russian interests?

This is what Iran has done in Lebanon, Syria, Yemen, and Iraq with its backing of the Iraqi Shiite militias, the Houthis, and Hezbollah. Iran has discovered the perfect formula to ignite conflicts and wars.

Who is not fighting whom in the Middle East today because of Iranian interference in Arab countries?

Conflicts, clashes, and full outright wars or civil wars are raging in the region. The countries involved directly and by-proxy pegs Iran against all the countries that joined the Saudi-led coalition to strike the Houthis in Yemen. The list includes the six Gulf countries in addition to Jordan, Egypt, Pakistan, Sudan, and Turkey.

If you add the civil war in Syria, and the battle against ISIS in Iraq, which is US-led but includes Britain, France, Dutch, and Australian participation, there are twenty countries in the region now engaged in battles against each other, each other proxies, or terrorist organizations that percolated as a result of the Iranian interference in Syria and Iraq.

If you add Lebanon, which is watching skirmishes across its border increase and where Hezbollah is stationed, and Israel because of its defensive posture on its northern borders, there are twenty-two countries now in a state of war. Really, who is not fighting whom in the Middle East?

Hit the pause button for a moment and reflect upon the number of 22 countries engaged in fighting terror in one region. All of them engaged because of Iranian terror, expansionist behavior, and violent policies that created the perfect conditions for ISIS to rise and al-Qaeda to surge back.

Iran is on the march causing destruction everywhere it lands. Yet, Barack Obama thinks any US-Iran deal should be void of establishing serious red lines against the Mullahs not to cross when it comes to developing and using proxies to start wars. This is why when analysts and pundits accuse Barack Obama of wanton disregard, of ignoring Iranian terror excesses, history will be on their side.

Who is not fighting whom in the region says a lot about the worst U.S. President ever to occupy office.

Who is not fighting whom in the Middle East?

The Art of No Compromise
The Iran Deal and the Syrian refugee crisis
Bin Laden Letter: “Iran is our main artery for funds, personnel, and communication”
Radicalism 567