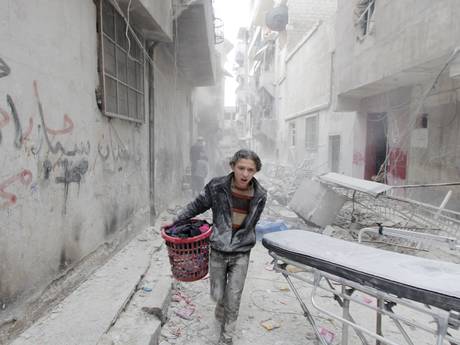 May 5, 2015 9:14 am 0
EU Imposing Fresh Sanctions on Assad Government
Behind the Assad Accusations is a Gas Pipeline To Free Europe
Assad preparing to use Chemical Weapons

Civilians in Syria’s war-torn city of Aleppo have described witnessing the bodies of decapitated children and body parts lining the streets, in a harrowing report detailing the “unthinkable atrocities” endured by those living through the civil war.

In a damning report released on Tuesday, Amnesty International accused all parties in the conflict of violating international humanitarian law and committing “grave” abuses of human rights that have seen civilians hit by the worst of the violence.

The human rights group said armed opposition groups such as Jabhat al-Nusra had abducted nearly 1,000 individuals, 142 of them children, who were sometimes tortured and forced to pay ‘fines’ in order to secure their release.

One local factory worker recalled seeing decapitated bodies lying in the street after a barrel bomb attack on the al-Fardous district in 2014. “I saw children without heads, body parts everywhere. It was how I imagine hell to be,” he said.

A surgeon in the al-Sakhour neighbourhood recounted some of the horrific injuries sustained during barrel bomb attacks, saying: “We have not seen these types of injuries in any medical book.”

“Barrel bombs are the most horrible and hurtful weapon… [We deal with] multi-trauma, so many amputations, intestines out of the body, it’s too horrible. We have seen incredible things.”

A member of the Civil Defence in Aleppo city said civilians were trapped in a continuous “circle of hell”. “The streets are filled with blood,” he told Amnesty. “The people who have been killed are not the people who were fighting.”

Residents gave accounts of constantly looking up at the sky for the next bomb, until becoming desensitised to the conflict surrounding them. “It became routine for the helicopter to be there above us, so I finally stopped looking up,” one said. “I smelled death everywhere.”

“Civilians in Aleppo are suffering unthinkable atrocities,” the report concluded.

“As a backdrop to these grave violations, residents of Aleppo city live in appalling conditions. Residents in both opposition-held and government-held areas lack basic services such as water and electricity, and suffer shortages in food, medicine and gas to heat their homes.

“Amnesty International calls on all parties to the Syrian conflict to end deliberate attacks on civilians and civilian objects such as hospitals and schools; to end indiscriminate use of explosive weapons such as barrel bombs and mortars in populated areas; to end arbitrary arrests, enforced disappearances, abduction and torture […] and to allow unimpeded humanitarian access to the UN and its implementing partners and in Syria as a whole.”

Assad Forces Targeting and Killing Christians
When We Defeat ISIS, Others Will Replace It
Time to Indict Assad of War Crimes in Absentia
Assad Genocide 429