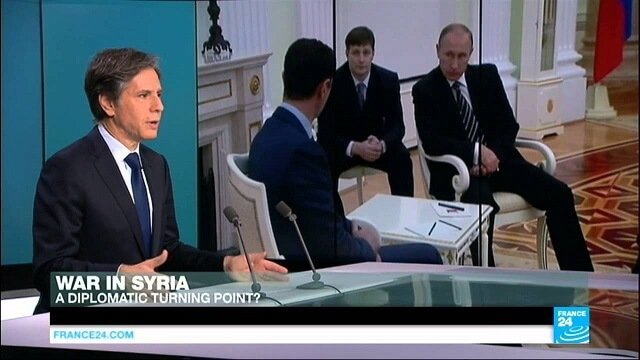 According to U.S. diplomats, staying power will win Syrian civil war. Russia’s intervention in Syria is “not going particularly well” and it should instead push for political transition in the country, U.S. Secretary of State John Kerry’s deputy Antony Blinken told France 24 television.

Russia says it has destroyed more than 800 terrorist targets in Syria since it began its campaign of air strikes on Sept. 30, an intervention Moscow says is aimed at destroying extremist Islamic militants, but which Washington says is also targeting moderate rebels opposed to the psychopath Baschar al-Assad.

Put differently, there is a point in time when the inherent costs for Iran and Russia associated with waging an overseas war against the majority of Syrians battling the tyranny of the Assad regime will become a game of staying power. Who can outlast whom considering Saudi Arabia is assisting by keeping oil prices artificially low due to its oil producer swing status.

Blinken said of Russia after taking part in talks on Syria in Paris:

“They cannot win in Syria, they can perhaps prevent Assad from losing, but they cannot win. Its actions on the ground in support of the regime are not going particularly well, they have made very little progress despite the onslaught of Russia airpower. Russia now has an incentive and more influence to move Assad and the regime towards a transition. There is a recognition on all sides that there is no military solution in Syria, that is a recognition that is now growing on the Russians.”

Blinken also said that Russia “cannot afford to alienate virtually all of the Sunni Muslim world”.

“What we must do now is to define in more detail a transition process,” he said.