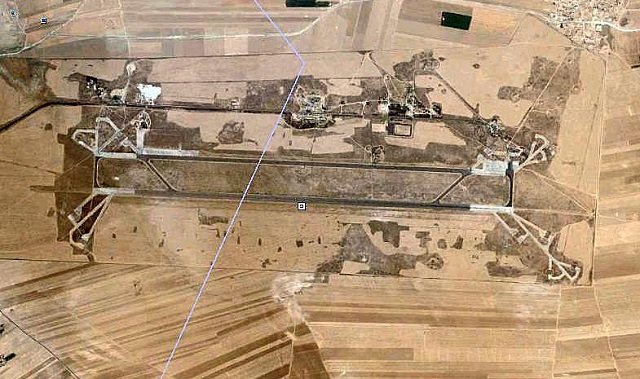 Rebels Advance on Syrian Air Base

Syrian rebels affiliated with Jabhat al-Nusra and other rebel groups advanced on Friday towards a military airport that is the last remaining government-held facility in the northwestern province of Idlib.

Activists on the ground said that the Islamist rebels advance has “seized the entrance” to the Abu Duhur airport after carrying out several suicide bombings on motorbikes and “seizing several positions on its outskirts”.

Syrian state television said the army had “killed a large number of Al-Nusra terrorists and destroyed their arms and equipment” at the facility.

The air strikes conducted by the Assad regime were launched in response to the onslaught, and that 16 Syrian soldiers and 18 rebels were killed in the fighting.

The so-called “Army of Conquest”, a collection of Islamist and jihadist fighting forces, captured the Idlib provincial capital in March and has since driven the Syrian military from most of the province.

The rebels advance and fall of the Abu Duhur Air Base would almost secure the last patch of land controlled by the Assad forces in the Idlib province, and would contribute to less barrel bombs the Assad regime has used the air base to kill civilians with indiscriminately.

The Syrian civilian population back the Islamist rebels who are defending them from the Assad chlorine gas barrel bombs. Something that is almost never mentioned in the western media. Such backing feeds into the recruitment process and the development of an extremist Islamic ideology no one at this White House is smart enough to understand.

Rebels Advance on Syrian Air Base