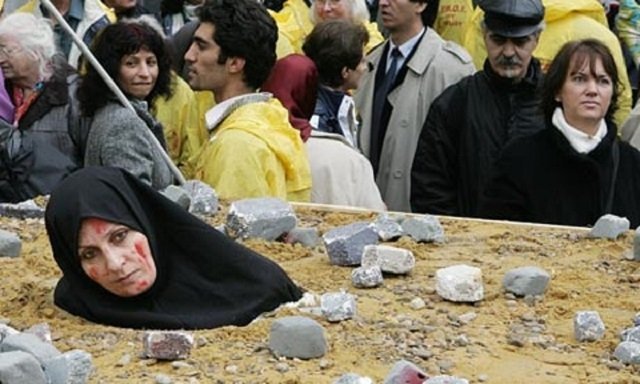 There is one certainty we could bank on today when Obama’s Iran deal is signed: Its ultimate victims are going to be Muslim and Christian women unable to leave their homes. For men of extreme violence, these women are the low-hanging fruits for easy picking.

Take the Muslim rape victims of the Assad regime no one talks about anymore. Assad men use rape as a weapon of war, they also rape women in prisons, and rape women en masse in open fields to psychologically defeat their enemies. Who are these rapists? Most likely Alawite men dehumanized to the point of total savagery.

On the other side of the coin, Michael Ledeen wrote an article on the “Radical Islam’s systematic use of rape” in which he outlines what a future Caliphate holds for Muslim women in terms of treatment.

There was a brief flurry of outrage at the report that the “Caliph” of the Islamic state had repeatedly raped American aid worker Kayla Mueller before she finally died in an attack against IS targets. The New YorkTimes devoted a lot of space to what it called the “theology of rape” that is an integral part of the doctrine and practice of the “Caliphate.”

On one side we have supposedly fanatic secular Muslim men raping Muslim women routinely and on the other side we have fanatic religious Muslim men in ISIS and in the Iranian theocracy abusing and raping women as part of a culture and a doctrine. Muslim women in the Middle East are just low-hanging fruits for brutal and barbaric men of violence.

There is no escaping this reality that men of extreme violence, be they part of the Assad or Iranian regimes or part of the Islamic State, are being let loose by Barack Obama and his administration to cause more damage against women than in any other part of the world. When Assad and ISIS are both ignored for abusing and raping women who are considered low-hanging fruits, the result is a lost generation of children who will fall straight into one of several baskets of terror awaiting them with open arms.

Where are Michelle Obama, Susan Rice, Valerie Jarrett, and Samantha Power in this equation? All absent, and all defending the Obama’s Iran deal that would result in more women dying, being abused, or getting raped.

Any regret you voted for Obama yet?

The Bus Explosion: Syria Cannot Speak for Extreme Sunni Islam Anymore Than Iran Does
Congress Must Reject Deal to Avoid Future War With Iran
The Strategy of Isolating Iran is Underway
Radicalism 567