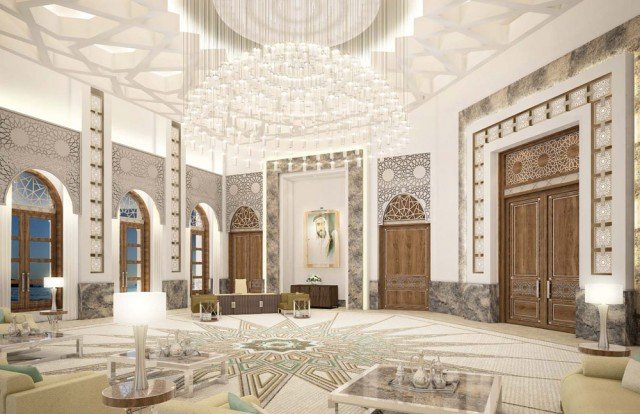 It’s bunker time for Assad. It’s time for him to think “where is my bunker?”

At the rate his forces are now accumulating losses, Assad ought to pick a bucket and a duster to spruce up his bunker most likely built under heavily populated areas like the Abu Rummaneh district where many foreign missions and Embassies are also located.

It’s bunker time for Assad if his forces keep abandoning their posts (See video below) the way they did in Ariha yesterday after receiving strict orders by the high command of the Assad armed forces to stand their grounds and fight. The cowards simply ran away. We wonder if any of them handled torturing Syrians in the Assad prisons.

If you had to guess how does the Assad bunker look like, here is what we think.

First and foremost, the bunker was decorated by Asma al-Assad. She tried to replicate the Assad Palace he calls People’s Palace with the same color schemes and duplicate furniture. She painted big windows on the walls and ordered silky drapes to cover them to emulate the exact look and feel of the palace sitting on top of the Qasioun mountain.

When the drapes are drawn back, you can see all of Damascus painted in the background exactly as Assad sees it from his palace. For Asma, Assad’s bunker time should be a positive experience to forget the guillotine waiting for him.

The bunker is divided into three corners. His and hers occupy the largest space in addition to a smaller corner where staff and military advisers can share for work and sleep.

On her side of the bunker, Asma built several large rooms. One to serve as a closet for her shoes, one for her clothes, another room for make-up, a fourth with a full photography studio to snap her own pictures to post them on Facebook, and lastly a bedroom with a Jacuzzi Las Vegas-style sitting across a round bed.

Just in case she needed to soak herself in milk and honey to look great for the cameras when she is captured.

On his side, Asma designed the room with furniture she bought at Sotheby’s in Paris. It was important for Assad to feel as if the war never happened.

The Assad bunker has access to high speed Internet and online shopping for Asma’s favorite pass time. She had a special factory-style elevator built in one of the buildings the Assads owned in Abu Rummaneh that had direct access to the bunker and could haul large pieces of furniture in and out just in case she gets bored with the decor.

Having online access to her favorite online stores was a crucial consideration when the bunker was designed. For her, bunker time means happy times.

In addition to high speed Internet, Assad’s side of the bunker has elaborate communications set-up connected to hidden cameras in every torture chamber the Assad built. Asma designed it for him just in case he gets bored and wants to be entertained by watching his people torture poor and helpless Syrians.

It’s bunker time for Assad. May he and Asma enjoy their stay until Damascus is liberated from the curse of this family.