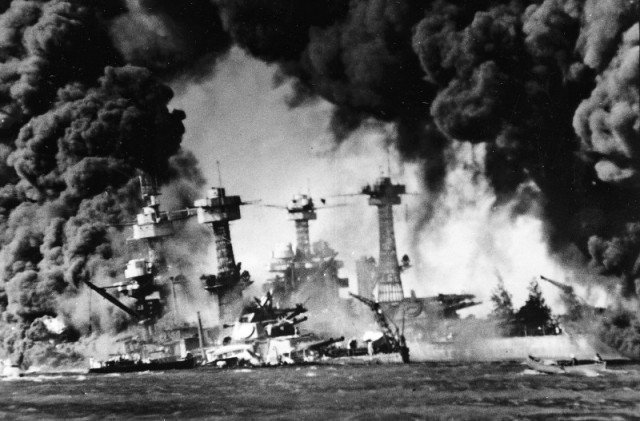 If isolationism corresponds to treating a sick patient, over the last six years of a hesitant Obama Administration, neo-conservatism has demonstrated it corresponds to preventing patients from getting sick in the first place. One doctrine waits until all hell breaks loose, and the other controls hell not to break loose. That until Nancy Pelosi blows the car engine before we reach the finish line.

I want you to watch this 2-minute BBC footage of interviews of officials and regular Americans prior to the Japanese attacking Pearl Harbor (Notice how similar was the Nazi American Party to those advocating today for Iran in the Obama Administration). Who said we could not turn back the clock?

There is a hysteria sweeping the nation amongst the hardcore Obama supporters. They see all the fires burning across the world and see their man, Barack Obama, re-enter Iraq with fighter jets and drones, and they are at a loss for words. Some go as far as claiming it is a humanitarian mission just to cover their a****. I would proffer to say Obama?s humanitarianism in Iraq is as valiant as his humanitarianism in Syria. The man cannot see a child die without getting all riled up to fire those drones.

The question then, have we reached a point in the failures of the Obama Administration foreign policy when we can say isolationism is worse than neo-conservatism? I think we have. During the Bush era, America, at least, defeated Islamic terror only to see us squander all these gains during the Obama era. Not only we depleted the military advantages we had, but also, Obama made America less safe by standing on the sideline while ISIS/ISIL metastasized, and he openly supported the Muslim Brotherhood who, in Egypt, started issuing terror threats. With Obama, not only we invigorated al-Qaeda, but we also gained ISIS/ISIL and the MB for free.

Grant you our involvement with US troops on the ground in Iraq may have caused far more casualties than anyone wanted, but no thanks to the same regime Mr. Obama today is kowtowing to, our troops remain in danger and so do our allies. As an example, Iran and Syria are behind Hamas attacking Israel; yet, the fact Obama is ignoring this important evidence should say a lot about what he thinks of our allies, in general, and Israel in particular. Who would blame PM Netanyahu for his displeasure with Obama?

When a major political figure in your political party derides you for your foreign policy, as did Hillary Clinton, it is time to compare isolationism to neo-conservatism. It is time to look at the win and loss column for each to find that balance that would serve our American national interests; these interests are facing new daunting threats that Obama cannot manage effectively as long as he is in the White House.

As disillusioned neo-conservatism was with Lyndon Johnson?s domestic policies, so has the far left become disillusioned with Obama?s foreign policy today as many watch with disbelief their ideology blow a gasket in the same country they derided the neo-conservatives for liberating. The mixture is bound to surprise us all in the coming years.

How can you go further left to Obama?s extreme left? Maybe Nancy Pelosi has the answer.