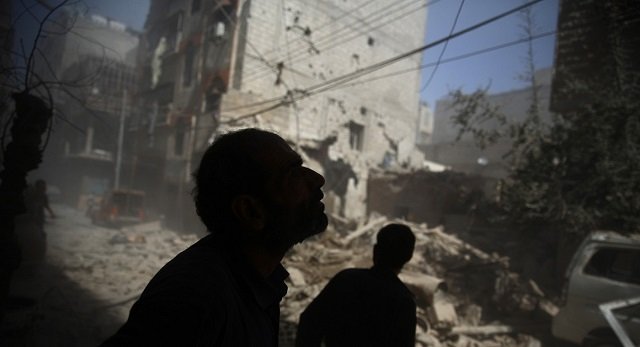 October 16, 2015 12:57 pm 0
Alawites Demand the Execution of Suleiman al-Assad
American De-Facto Break-Up of Syria
It is not about the Alawites of Syria, It is all about Assad

Source: Politico Magazine – by Frederic C. Hof (I Got Syria So Wrong)

I spent early 2011 trying to ease tensions between Syria and its neighbors. I never predicted the brutality that would come from inside.

w and then I am asked if I had predicted, way back in March 2011 when violence in Syria began, that within a few years a quarter-million people would be dead, half the population homeless and hundreds of thousands of defenseless civilians terrorized, traumatized, tortured and starved. The companion question, more often than not, is if I had forecast the failure of the West to offer any protection at all to Syrian civilians subjected to a systematic campaign of mass homicide. Having first been exposed to Syria as a teenage exchange student, I was expected by questioners to know something about the place. And as a State Department officer, I was assumed to know something about my government.

But no. It took me the better part of eighteen months to comprehend fully the scope of an unfolding humanitarian and political catastrophe. By September 2012, when I resigned my State Department post as adviser on Syrian political transition to Secretary of State Hillary Clinton, I knew that Syria was plunging into an uncharted abyss—a humanitarian abomination of the first order. And I knew that the White House had little appetite for protecting civilians (beyond writing checks for refugee relief) and little interest in even devising a strategy to implement President Barack Obama’s stated desire that Syrian President Bashar Assad step aside. But at the beginning, nothing drawn from my many years of involvement in Syria inspired accurate prophesy.

That Russia’s recent military intervention in Syria has shocked the Obama administration is itself no surprise. For nearly two years, Washington had chased Moscow diplomatically in the belief that the Kremlin’s soothing words about supporting political transition in Syria were truthful. That which was obvious to many—Russia’s desire to perpetuate Assad in office—is now jarringly clear to the administration. That training and equipping anti-Assad rebels to fight anyone but Assad has been dropped like a bad habit by an administration warned not to proceed along these lines is hardly a bolt from the blue. But the White House is not alone in failing to accurately forecast the severity of the Syrian disaster.

The major reason for my lack of foresight: It didn’t have to turn out this way, and I remain mildly surprised that it did. It is not that Syrians were without grievances concerning the way they were being governed. Widespread unemployment, underemployment and opportunity deficits were already prompting those with means among the best and brightest to leave the country. Although the regime’s corruption, incompetence and brutal intolerance of dissent were hardly state secrets, Assad was not universally associated by Syrians with the system’s worst aspects: “If only the president knew” was a phrase one heard often. Some Syria watchers believed that the Arab Spring would visit the country in the form of political cyclone. I did not. I did not think it inevitable that Assad—a computer-savvy individual who knew mass murder could not remain hidden from view in the 21st century—would react to peaceful protest as violently as he did, with no accompanying political outreach. And as Syria began to descend into the hell to which Assad was leading it, I did not realize that the White House would see the problem as essentially a communications challenge: getting Obama on “the right side of history” in terms of his public pronouncements. What the United States would do to try to influence Syria’s direction never enjoyed the same policy priority as what the United States would say.

Back in early 2011, it seemed possible not only to avoid violent upheaval in Syria but to alter the country’s strategic orientation in a way that would counter Iran’s penetration of the Arab world and erase Tehran’s land link to its murderous Hezbollah militia in Lebanon. Much of my State Department time during the two years preceding Syria’s undoing was thus spent shuttling back and forth between Damascus and Jerusalem, trying to build a foundation for a treaty of peace that would separate Syria from Iran and Hezbollah on the issue of Israel.

There was a degree of idealism in my quest, born in the brain of an American teenager many years before. But there was another personal element as well. Long before Hezbollah murdered Mr. Lebanon—Prime Minister Rafik Hariri—in 2005, it had brutally and pathologically tortured to death a friend of mine serving as an unarmed United Nations observer, Marine Lt. Col. Rich Higgins. Peace between Israel and Syria would require Damascus to cut all military ties to Hezbollah. It would require Syria to stop facilitating Iran’s support to Hezbollah. It would set the stage for a Lebanon-Israel peace that would further marginalize Lebanon’s murder incorporated. Peace for its own sake is good. But the prospect of beating Hezbollah and its Iranian master was inspiring. This prospect, more than anything else, motivated the mediation I undertook as a deputy to Special Envoy George Mitchell in the State Department.

Assad, told me in late February 2011 that he would sever all anti-Israel relationships with Iran, Hezbollah and Hamas and abstain from all behavior posing threats to the State of Israel, provided all land lost by Syria to Israel in the 1967 war—all of it—was returned. My conversation with him was detailed in terms of the relationships to be broken and the behavior to be changed. He did not equivocate. He said he had told the Iranians that the recovery of lost territory—the Golan Heights and pieces of the Jordan River Valley—was a matter of paramount Syrian national interest. He knew the price that would have to be paid to retrieve the real estate. He implied that Iran was OK with it. He said very directly he would pay the price in return for a treaty recovering everything.

Israeli Prime Minister Benjamin Netanyahu was interested. He was not at all eager to return real estate to Syria, but he found the idea of prying Syria out of Iran’s grip fascinating. And the negative implications for Hezbollah of Lebanon following Syria’s peace accord with Israel were not lost on him in the least. Although there were still details to define about the meaning of “all” in the context of the real estate to be returned, Netanyahu, too, knew the price that would ultimately have to be paid to achieve what he wanted.

But by mid-April 2011 the emerging deal that had looked promising a month earlier was off the table. By firing on peaceful demonstrators protesting police brutality in the southern Syrian city of Deraa, gunmen of the Syrian security services shredded any claim Assad had to governing legitimately. Indeed, Assad himself—as president of the Syrian Arab Republic and commander in chief of the armed forces—was fully responsible for the shoot-to-kill atrocities. Even so, he told Barbara Walters in a December 2011 ABC TV interview, “They are not my forces, they are military forces belong[ing] to the government . . . I don’t own them, I am the president. I don’t own the country, so they are not my forces.”

Before the shooting began the United States and Israel were willing to assume Assad had sufficient standing within Syria to sign a peace treaty and—with American-Israeli safeguards in place—make good on his security commitments before taking title to demilitarized territories. But when he decided to try to shoot his way out of a challenge that he and his first lady could have resolved personally, peacefully and honorably, it was clear he could no longer speak for Syria on matters of war and peace.

Some of my U.S. government colleagues from bygone days tell me we dodged a bullet: that an uprising against the Assad regime’s arrogance, cluelessness and corruption in the middle of treaty implementation would have caused real trouble. Others believe we were too slow: that a treaty signing in early 2011 could have kept the gale force winds of the Arab Spring from unhinging Syria. I don’t know. I don’t know if Assad or Netanyahu would, in the end, have done a deal. What I do know is that I felt good about where things were in mid-March 2011. What I also know is that by mid-April hope of a treaty was gone, probably never to return in my lifetime.

Assad’s decision to apply lethal violence to something that could have been resolved peacefully was the essence of betrayal. He betrayed his country so thoroughly as to destroy it. Four years on, he reigns in Damascus as a satrap of Iran and a dependent of Moscow. In the end, he solidified Israel’s grip on land lost in 1967 by his defense minister father.

Is the US now a proxy of Iran?
It is unconscionable to strike grain silos in northern Syria
Leak to Weaken Israel
Opinions 1017 Syrian Revolution 1335