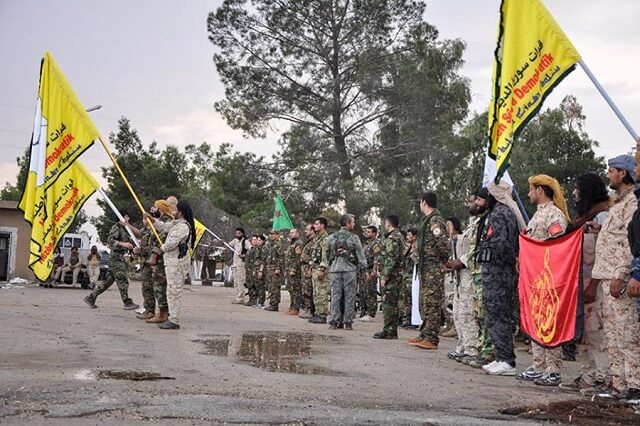 The Moderate Forces in Syria Against ISIS

A newly formed U.S.-backed Syrian rebel alliance on Saturday launched an offensive against Islamic State in the northeast province of Hasaka, a day after the United States said it would send special forces to advise insurgents fighting the jihadists. The moderates forces in Syria do exists after all.

It was the first declared operation by the Democratic Forces of Syria, which joins together a U.S.-backed Kurdish militia and several Syrian Arab rebel groups, since it announced its formation earlier this month.

World powers and regional rivals are convening in Vienna to seek a solution to the four-year conflict in Syria that has escalated since Russia intervened a month ago with an intense air campaign.

Fighting in Hasaka had begun after midnight, a spokesman for the alliance said. A group monitoring the war reported fighting and coalition air strikes in the area.

A video posted earlier on Youtube announced the offensive in southern Hasaka by the moderate forces in Syria, and showed several dozen men in fatigues standing outdoors with yellow flags and banners carrying the name of the Democratic Forces of Syria in Arabic and Kurdish.

The campaign would “continue until all occupied areas in Hasaka are freed from Daesh,” a spokesman for the alliance’s general command said in the video, using an Arabic name for IS. He urged residents to stay away from IS-controlled areas of Hasaka.

“The battle began after midnight,” Talal Salu told Reuters via internet messaging service. “They were flanked by our forces… (who) thwarted a counter attack.”

The United States’ decision to station ground troops in Syria comes after it dropped ammunition to rebel groups in northern Syria several weeks ago.

Washington’s strategy in Syria has shifted from trying to train fighters outside the country to supplying groups headed by U.S.-vetted commanders.

Activists on the ground said fighting was raging on Saturday near al Hawl, a town close to the Iraqi border, accompanied by coalition air strikes.

Hasaka province borders Iraq and territory there that is a crucial stronghold for Islamic State.

One member of the moderate forces, the Kurdish YPG has to date proved Washington’s most effective partner on the ground against IS in Syria. It had pushed towards the border in previous fighting this year.

The Raqqa Revolutionaries Front, one of the Arab groups in the alliance, on Thursday declared an imminent offensive against Islamic State in its Syrian stronghold of Raqqa province, which borders Hasaka.

The Moderate Forces in Syria Against ISIS